The grave in Deansgrange Cemetery, Dublin, of the three O’Donel brothers – Sidney, Hugh Stephen and William James – is sad enough, given that the two younger brothers were only 20 and 26 years old when they died. What makes it sadder still is that two of them died far from home – although their names are inscribed on the family grave. William James died in Brazil and Sidney in Burma.

Sidney O’Donel was the only one who had Indian connections. He was born on the 31st of July 1892 to Francis and Kathleen Charlotte O’Donel. Francis was a land agent and Justice of the Peace in Castlebar, County Mayo. After his death his widow and children moved to Dublin and are recorded as living in the fashionable Pembroke district in 1911. Later, the family must have moved to Northern Ireland because Kathleen Charlotte spent her last days in Belfast and Sidney O’Donel is listed in the Great War Roll of Honour in Portora Royal School, Enniskillen, County Fermanagh.

He graduated from Dublin in July 1914 and almost immediately joined the Army Veterinary Corps, starting out as a Lieutenant. From September of that year to July 1916, he was kept busy in France, Belgium, Gallipoli and Egypt. Base Veterinary Hospitals were established in several theatres of war and overworked army vets struggled to return 80% of injured animals back to duty. Considering the number of animals on the battlefields was approximately 2.5 million, this was an astonishing feat.

O’Donel’s contribution did not go unnoticed and he was mentioned in despatches.

He was further awarded the Military Cross for Gallantry as well as the three obligatory medals – 1914 Star with Clasp and Roses, British War Medal and Victory medal. 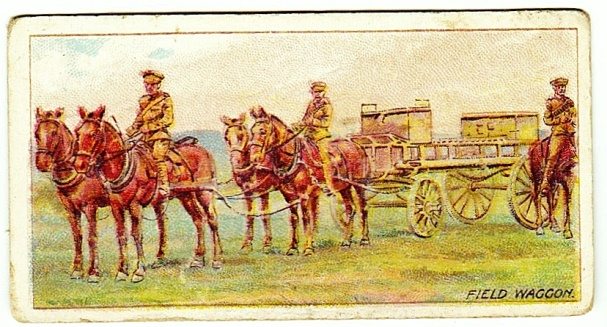 Barely recovered from the wars, O’Donel packed his instruments for the long sea journey to India, most probably to serve in the Bengal Army, judging from his postings. A sizeable number of veterinary officers were sent to India where animals were employed to transport artillery, troops and supplies. Then there were the unfortunate ones who ended up on the mess tables.

After the third Anglo-Afghan war, O’Donel entered the battlefield during the tribal uprising in Waziristan. Mules were in particular demand in the mountainous terrain of the Northwest Frontier, as were camels. Animals were of more value to the Afghans than humans and they would sooner steal horses and camels than kill them, where possible – unarmed camp followers being the first to be relieved of their livestock.

O’Donel won the India General Service medal for the Afghanistan NWF campaign of 1919 with clasp bearing “Afghanistan NWF 1919” and a second clasp “Waziristan 1919-21”. At some point, O’Donel managed to find the time to marry Olwen Diana Gwyn of Chelsea, ten years his junior. I could find no evidence of any children.

By September 1925, O’Donel was a Major in the India Continuous Service Cadre and was appointed Veterinary Officer in the Equitation School in Saugar in 1928. Here, horse-breeding and dog-training were a welcome respite from treating animals injured in war. He appears in Lahore in 1929 – probably attached to the research laboratory there. In1934, O’Donel took command of the Army Veterinary School in Ambala.

O’Donel rose to Temporary Colonel in 1943 before facing his biggest challenge in the Burma Campaign. Surra (trypanosomiasis), transmitted by deadly flies, was a formidable problem in the jungles of Burma given the severe shortage of veterinary officers, insufficient microscopic equipment and meagre supplies of drugs for preventative and curative treatment. Horses and mules were integral transporters of supply to the Eastern Army (later 14th Army) whose guerrilla columns penetrated some of the most virulent surra belts in Assam and Burma. By 1944 the Burma Campaign had necessitated the formation of anti-surra units, which were especially equipped with microscopes and mechanised transport to enable officers and VAS to operate simultaneously in various locations.

Also of epidemic proportions was Anthrax, eventually defeated by preventative inoculations every six months of all army animals destined for Assam and Burma since a steady stream of livestock was sent to the fighting area for Indian soldiers to whom tinned meat was unacceptable for religious reasons. 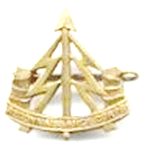 O’Donel treated his last animal in Burma, for that is where he died on active service on Christmas Day in 1945 at the age of 53. He was buried in Rangoon War Cemetery. The Burma Star was added to his impressive collection of medals.

His widow, Olwen Diana, did not stay long in India. Ten days later, she sailed from Bombay to Southampton on the ‘Ile de France’. She settled in 4 Eaton Place, London, but does not seem to have remarried. Olwen died in March 1965, in St Stephen’s Hospital, Chelsea. Her probate notice mentions three gentlemen, all of whom had connections with the Services –

After WWI, when a large number of wounded animals were treated and returned to service, the prefix Royal was added to the AVC in 1918.

The Indian Army Veterinary Corps was raised in 1920 along with the establishment of two Army Veterinary Schools – in Poona and Ambala. The former closed after the outbreak of war in 1940, leaving Ambala as the sole school. AVS advised on a wide variety of animals: horses, mules donkeys, camels, elephants, and bullocks for transport; buffaloes and cows for dairy products; cattle, sheep,
goats, swine, poultry and rabbits for food; carrier pigeons for the Indian Signal Corps; war dogs for services to the Provost Marshal; and guinea pigs, rats and mice for laboratory research.

An Officers’ Training School was added in 1944, which held regular classes in animal management for personnel of other arms of the Service. It also offered veterinary assistance to the
Military Farm Department, investigating infertility in cattle and inoculating against rinderpest, variola, anthrax etc.

Upon the Partition of India in 1947, the horse-breeding stud farms fell in the jurisdiction of the newly-formed Pakistan. Only the laboratory was moved from Lahore to Lucknow where the Indian Remount Veterinary Corps was based. The Equitation School moved to Meerut and included the training of dogs.

‘Service to animals is our duty’. 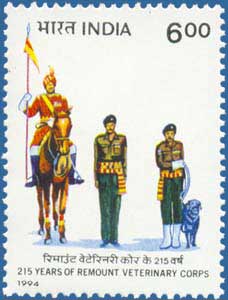 In 1994, India issued a postage stamp to commemorate 215 years of the Remount Veterinary Corps.