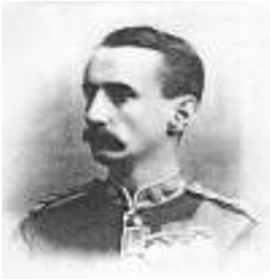 Dorothea Jane French, the above Dora, came from the St. George French family of Clonyquin in Roscommon. She married William Montgomerie Stuart Caulfeild in St. Peter’s Church, Dublin, in 1847. William was a Lieutenant Colonel in the 66th (Berkshire) Regiment of Foot and a descendant of the Barons of Charlemont, County Armagh. His mother, the Hon. Augusta Crofton, was a Baron’s daughter. Dora gave birth to three girls and six boys in Ireland.

Algernon Montgomerie was born in 1858 in Monkstown, Dublin, and came sixth on the sibling ladder. He completed his schooling in the Royal Academy at Gosport and went on to Heidelberg College in Germany.

In 1878, he joined his father’s regiment, the 66th Regiment of Foot. For reasons known only to him, he chose to be a ‘gentleman ranker’ rather than an officer, parading under the name Frederick Williams. Two years later, Private Williams found himself fighting in the Second Anglo-Afghan War, in the ferocious battle of Maiwand.

THE BATTLE OF MAIWAND 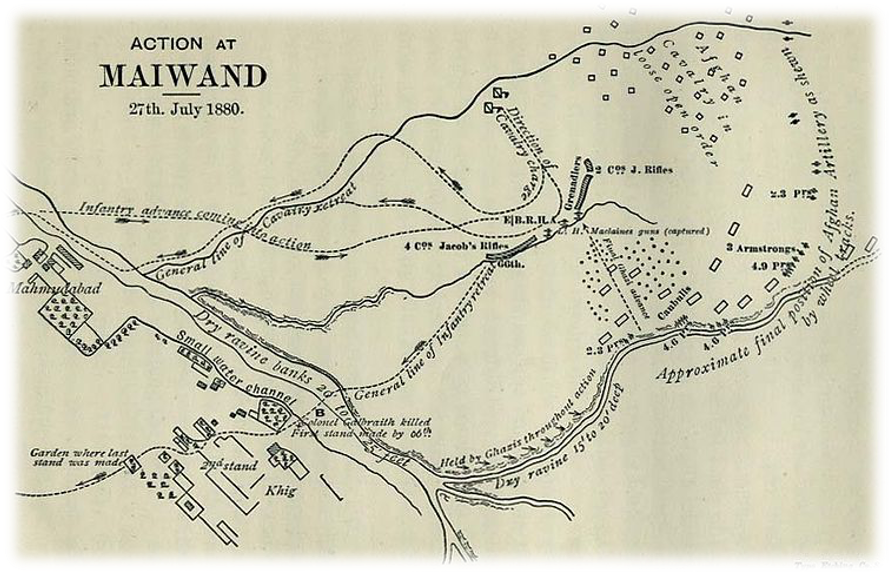 A major encounter of the Second Anglo-Afghan War, the battle of Maiwand was fought on July 27, 1880. Responding to a warning that the Afghan force was approaching the Maiwand Pass, Brigadier General Burrows decided to tackle the advance guard with a brigade of 2,500 troops, unaware that the Afghans numbered 25,000. Many of the 66th, pursued across a ravine, was forced into a walled garden in the village of Khig where they fought valiantly until the last eleven survivors were killed. As a result, the 66th not only lost most of its six units but also its colours, which to the regiment would have been an equally tragic loss. 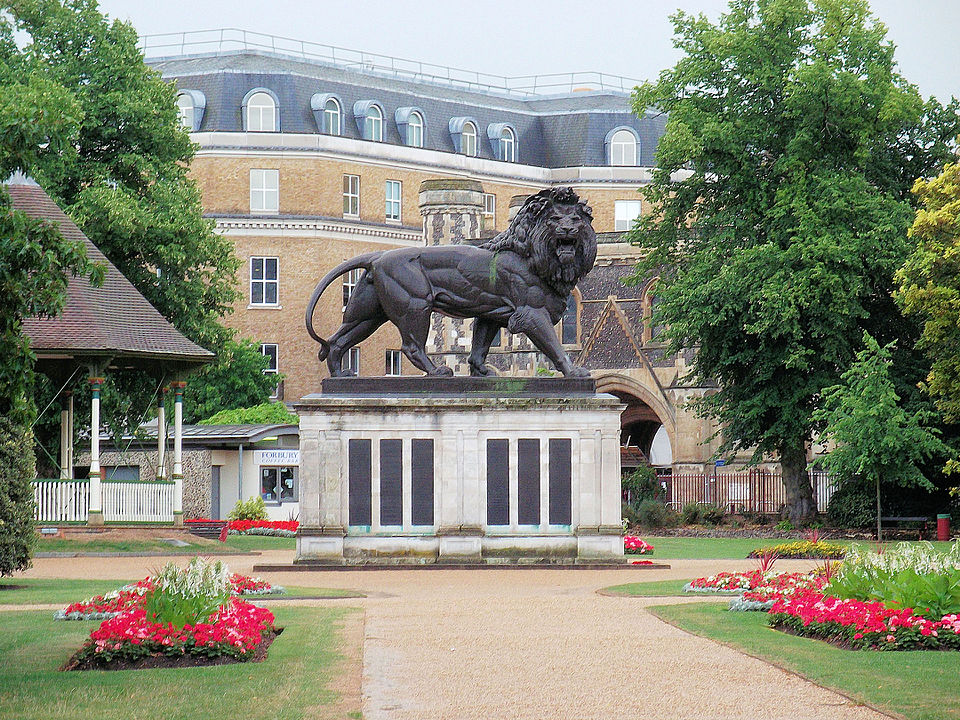 A statue entitled ‘The Maiwand Lion’ in Forbury Gardens in Reading, Berkshire, commemorates ‘the valour and devotion’ of the regiment. Despite being wounded himself, Corporal Williams assisted two injured officers by moving them to Kandahar, for which act of gallantry he was awarded the Distinguished Conduct Medal. He was promoted to Sergeant and Queen Victoria herself presented him with the DCM. The story goes that Her Majesty advised him to revert to his original name of Caulfeild so he surrendered to his monarch’s suggestion and was commissioned in the 5th Northumberland Fusiliers as Algernon Montgomerie Caulfeild.

The regiment’s motto was ‘Quo Fata Vocant’ (Whither the Fates Call) and when the fates called Algernon to Burma, he followed them. He served as Brigade Transport Officer between 1886 and 1888 during which he was not only mentioned in despatches but also won the Distinguished Service Order.He transferred to the 5th Border Regiment and fought with the mounted infantry in the Chin-Lushai Expedition of 1889 (ref Buchanan biography).

After Assam, Algernon fought in the Egypt Campaign before stepping away from wars to marry Edith Mabel Browning in London in 1897. Mabel was born in 1871 and was the daughter of Henry Bainbridge Browning, a spirit merchant from Chelsea. The following year Algernon was promoted to Major and retired but remained on the Reserve List. Their daughter, Kathleen Montgomerie, was born in London in 1901. The family lived in Chelsea until 1913, when his violent temper (common among soldiers who had witnessed the horrors of war) became too much for Edith and she filed for divorce. Her angry husband moved to Weybridge where he lived in a house named ‘Kalacherra’ after a tea-growing region of Assam, India.

Soon after, the Great War broke out and Algernon was recalled to duty. He sailed to Turkey in July 1915 as second-in-command of the 6th Border Regiment. Leading his platoon in Gallipoli, Algernon displayed the same fearlessness he had shown in the past. He was easily recognisable by his unusual habit of always wearing leggings. On the 9th of August, he led his men under serious enemy fire towards the Turkish trenches on Chocolate Hill, ‘as if he were walking down Piccadilly’, according to a fellow-officer. Major Caulfeild was never seen again.

In the expectation that he might still be alive, his brother, Captain James Montgomerie Caulfeild, expressed the touching hope that Algernon had been taken prisoner by the Turks. James believed that his brother’s twenty years in the east had given him a reasonable command of its languages, ‘so [he] will be cared well for by the Turks . . . his little daughter and I hope on’. Their hopes dashed, the tributes that flowed were of little consolation to the family. A memorial tablet in his home church of St. Mary’s in Weybridge lists his name among the forty-nine parishioners who died in the Great War. He is also remembered on the war memorial in St Peter’s Church in Wrecclesham, Farnham, possibly because his ex-wife, Edith Mabel, was living in Farnham when Algernon went to war. There is also reputed to be a stained glass window in the church in his memory.

Major Algernon Montgomerie Caulfeild is remembered on the thirty-metre-high Helles Memorial obelisk on the Gallipoli Peninsula. 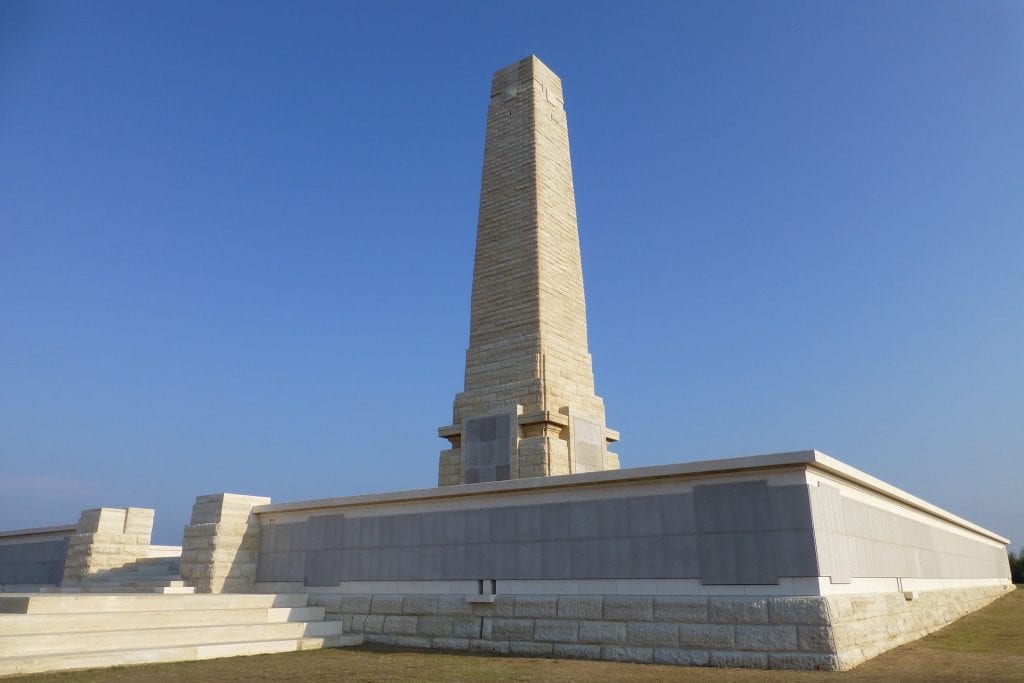 Saddest of all, is the inscription on his parents’ grave in Dublin –

Algernon’s ex-wife, Edith Mabel Caulfeild, may have moved to ‘Kalcherra’ because she died in Weybridge in 1956 (although at a different address). Their daughter, KATHLEEN MONTGOMERIE, married the Rev Thomas Weston Page-Phillips but they don’t appear to have had any children.