It is fifty years since the Irish Defence Force went to serve as part of a United Nations Peacekeeping Mission in the Congo in July 1960. The experiences and events of their service there reflect both the inconsistencies and constraints of the original UN mandates and the complex political and military situation extant at that time, but also the determination of the Irish to carry out the work of the UN and keep the peace, and indeed create peace, in the Congo.

Based on the experiences of many of the soldiers who served there, this article gives a quick overview of the four years and primarily concentrates on the initial phase of operations in the Congo and explains some of the routine work involved in peacekeeping. 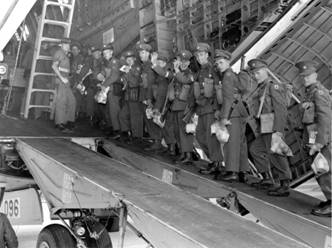 A group of N.C.O.s and Privates of the ‘A’ Company, 33rd Battalion enter a U.S. Globemaster at Baldonnel en route for the Congo in 1960

It deals with an overview of the history of the Congo, the background to the formation of UN Forces, organisation of initial units and preparations for departure, uniforms and health in the early stages, the nature of the deployment areas, negotiating skills and tension reduction tactics, patrols and the lead-up to Niemba, new equipment, operations 1961 to 1963, humanitarian projects and provides a conclusion.

Opening of Museum at Glasnevin Cemetery

The Military Heritage of Ireland Trust CLG is pleased to announce the opening of the new Glasnevin Museum at Glasnevin Cemetery, which was opened by An Taoiseach, Mr. Brien Cowen T.D on 8th April 2010.

The self-funded €11 million museum will showcase the social, historical, political and artistic development of modern Ireland, through the lives of 1.5 million people buried in Ireland’s national acropolis. Glasnevin Trust, which operates the cemetery, expects the Museum to cater for 100,000 visitors from home and abroad in the period May to December 2010. This will rise to 200,000 in 2011.

The cemetery was originally opened by the great ‘Liberator’, Daniel O’Connell, in 1832 for the purpose of ‘burying people of all religions and none’ with dignity. Since opening 178 years ago over 1.5 million people, from all walks of life, have been buried in Glasnevin. Each and every detailed burial record is preserved both in the cemetery’s original handwritten journals and also hosted online on Glasnevin Trust’s web-site www.glasnevintrust.ie .

Admission to the museum’s exhibitions is:
€6.00 for adults
€4.00 for children, with 10% discounts offered for students and OAPs.

Family tickets for both the museum and cemetery walking tour can be purchased for €25.00 (2 adults and 2 children).

It is intended that a ‘Military Heritage Trail’ will be created for the cemetery. There are many famous persons associated with the Irish War of Independence, and other military events, whose graves are to be found in the cemetery.

Others include a Royal Dublin Fusilier and an Irish Volunteer who were killed in Dublin during the 1916 Rising – they lie close to one another.

The Military Heritage of Ireland Trust are pleased to announce the addition of the following military heritage website to the ‘Links’ section of its website. http://www.themanwhocapturedwashington.com/ .

The story of General Robert Ross is not widely known but the part he played in the War of 1812 is widely remembered for the burning of Washington. The following extract from the ‘Welcome’ section of the website sets out the rationale for the creation of this fine addition to the digital library of the Irish Soldier:

“The bicentennial of the ‘War of 1812’ is fast approaching, a conflict which witnessed the capture of Washington and the burning of the public buildings by the British, not least the ‘White House’, the U.S. Capitol (including the Supreme Court and Library of Congress) and the Washington Navy Yard. Against this background, the restoration in 2008 of a monument to General Robert Ross (the man who captured Washington) in his home village of Rostrevor, County Down, Northern Ireland has been timely. Commemorations of key historical events afford opportunities to throw fresh light on what happened.”