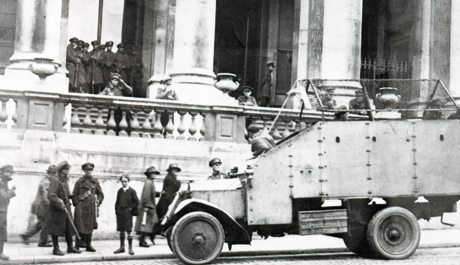 This guide is designed to help those doing research into aspects of Irish military history from earliest times to the present day, whether they are seeking information on a family member’s participation in an historical conflict or engaged on an academic study. This guide was commissioned by the Military Heritage of Ireland Trust, which was established in June 2000 to foster knowledge of Ireland’s military heritage, and its relationship to the economic, political, social and cultural affairs of the country.

This guide aims to fill a definite need. There is a significant level of interest in the remembrance and commemoration of Irish participation in warfare;but many people are unaware of how to obtain information about this subject. This guide explains the steps to be taken when seeking information on military history. It lists the institutions, archives, public bodies and organisations, that hold information relevant to military heritage and it provides brief descriptions of the material held by them.

The Military Heritage of Ireland Trust CLG is eager to record military heritage in its broadest sense, so museums, fortifications, battle sites and places in Ireland relevant to military affairs are included.

Because the worldwide web is a major resource for those embarking on research, we have compiled a comprehensive guide to sites relevant to Irish military history. Where possible we note where a web site is that of an institution or official body, or the work of an enthusiast, which may be less authoritative.

Very often a researcher’s questions will at least be partially answered by published work, and an up to date bibliography is provided.

One of the major aims of the Trust is to promote an inclusive view of the Irish men and women who participated in conflict. Unfortunately it has not always been possible to do this in Ireland. Commemoration and remembrance have often been fraught with controversy and many Irish people’s service has been effectively forgotten. This guide attempts to promote the study of all Irish military participation, regardless of the location or the cause espoused. In the twentieth century alone, for example, Irish men and women have fought in two world wars, on both sides in the Boer war and Spanish Civil war and in a revolution and civil war in Ireland itself. This guide includes sources relevant to the study of all these conflicts as well as the defence forces of independent Ireland and the United Kingdom.

Not everyone seeking information will be satisfied. Firstly, much greater volume of material exists for the twentieth century than for earlier periods. Therefore it will be more difficult to find archival material on warfare in the Middle Ages than on the First World War. Even when researching quite recent conflicts, however, problems may still arise for example, for those seeking information on a relative’s service. Much important material on Irish service in the British armed services is held in Britain and may entail a visit to archives there. It is an unfortunate fact that it will be easier to find information on someone who was killed in either of the two world wars than on those that served but survived. In many cases information will only be released to proven next of kin or with the permission of the individual’s family. It is advisable to have as much information as possible on an individual before commencing research as this greatly improves the chances of being successful. Research on the revolutionary period in Ireland itself also presents problems. For example, we still have no complete record of the dead from the 1916-23 period. Thousands of Irish people served in revolutionary or non-state military formations, and for a variety of reasons, records of these movements are incomplete scattered, or hard to access for the non-academic researcher. Where possible we will signal particular problems or restrictions that may confront a researcher.

Very often, preliminary research into local military history will be satisfied by a visit to the local public library; therefore a complete list of local libraries has been included in this guide. For more detailed information however, it will often be necessary to contact one or more archives. The major repositories for records relating to Irish military records are the Military Archives, the National Archives of Ireland, the National Library of Ireland, University College Dublin Archives, (all in Dublin), the Public Record Office of Northern Ireland (in Belfast) and the Public Record Office in London. Many archives of schools, religious bodies or private companies will also hold relevant records.