The President Michael D. Higgins was greeted by Colonel John Ryan (Retd) who was one of the first Defence Forces Officers to deploy with the United Nations Observer Group in Lebanin (UNOGIL) in 1958. The President was welcomed by An Taoiseach Mr Leo Varadkar T.D. and the Minister of State with Responsibility for Defence Mr Paul Kehoe T.D. 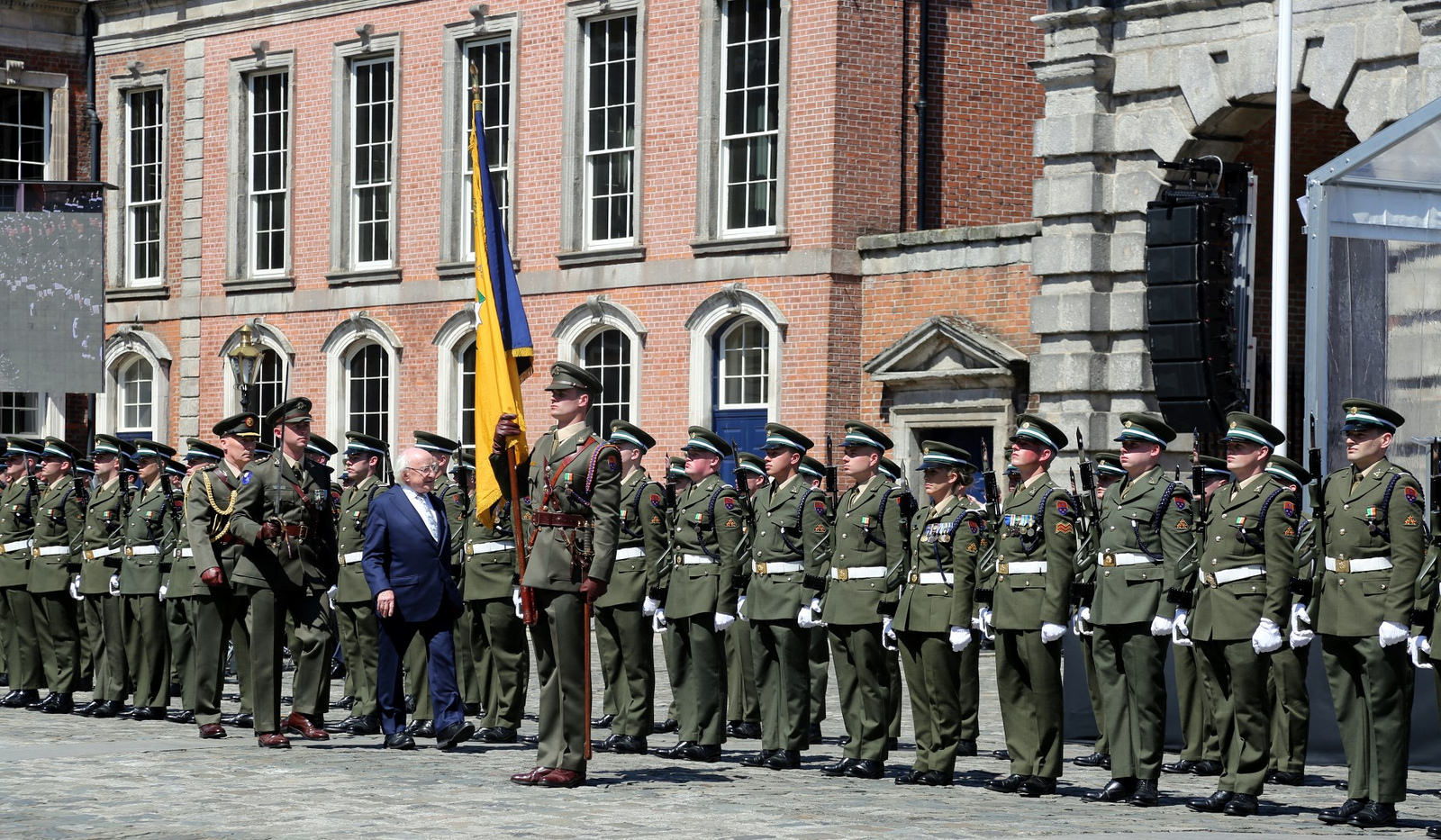 The attendance included members of the Government, civic leaders, the Diplomatic Corps, Defence Attaches, serving and retired personnel of the Defence Forces, An Garda Síochána, the Department of Defence and Department of Justice, and representatives of Veterans’ and Regimental Associations. The President inspected a Guard of Honour drawn from the 1 Infantry Battalion, 1 Brigade.

The President laid a wreath commemorating and honouring the 86 Defence Forces personnel, and 1 member of An Garda Síochána, who have paid the ultimate sacrifice, serving their country, overseas in the cause of peace.
Ireland’s involvement in such operations commenced three years after the country joined the United Nations Organisation, with the deployment of 50 Defence Forces officers to the United Nations Observer Group in Lebanon (UNOGIL) to prevent the illegal infiltration of personnel or arms supplies from Syria to Lebanon. 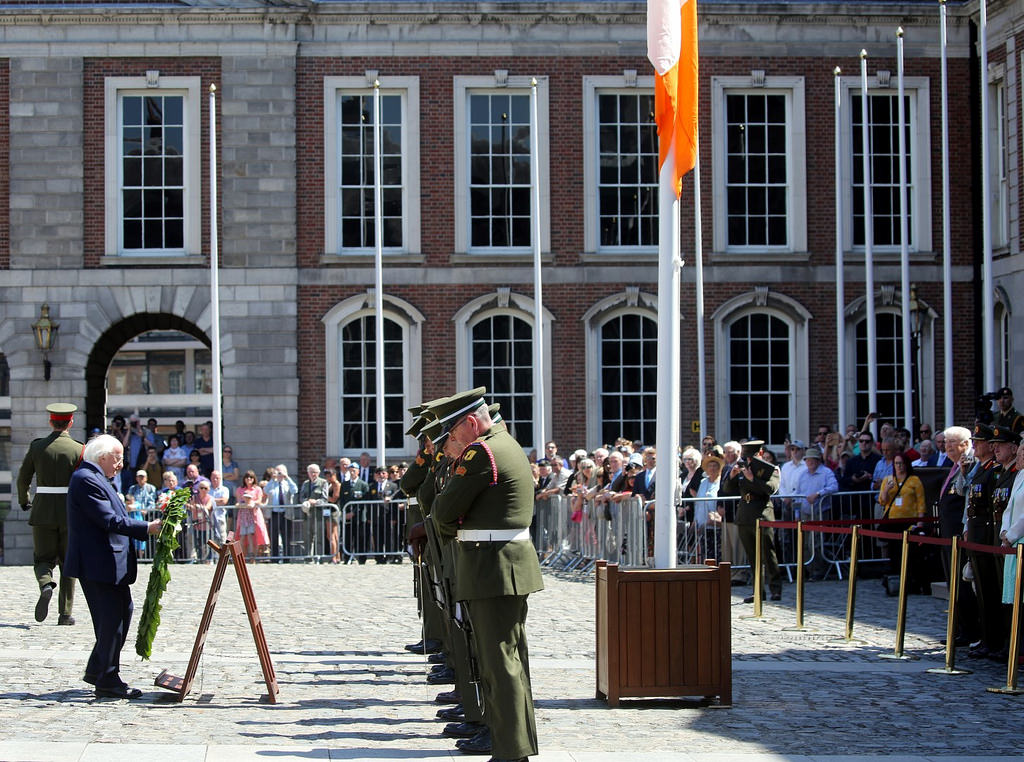 Since 1958, personnel of the Defence Forces, An Garda Síochána and civilians have participated in such operations around the world, including service in Afghanistan, Angola the Balkans, Cambodia, Central America, Chad, Congo, Côte d’Ivoire, Cyprus, East Timor, Egypt, Eritrea, Ethiopia, Golan Heights, Iraq, Iran, Jordan, Kuwait, Lebanon, Liberia, Mali, Namibia, Palestine, Pakistan, Somalia, Syria and West Irian (the western half of New Guinea). The Flags of these nations were carried in Dublin Castle by personnel of the Defence Forces, An Garda Síochána, ONET and IUNVA. Over the last six decades Ireland has maintained the longest unbroken service on the frontline of peacekeeping missions. More than 67,000 individual tours of duty have been completed by personnel from Óglaigh na hÉireann on United Nations missions, and on peace support operations authorised by the United Nations under the auspices of the European Union, NATO and OSCE.

Currently, 645 personnel are deployed on 13 missions in 13 countries and 1 sea. They include 370 personnel serving with UNIFIL in Lebanon, a mission which Ireland has supported continuously for 40 years. 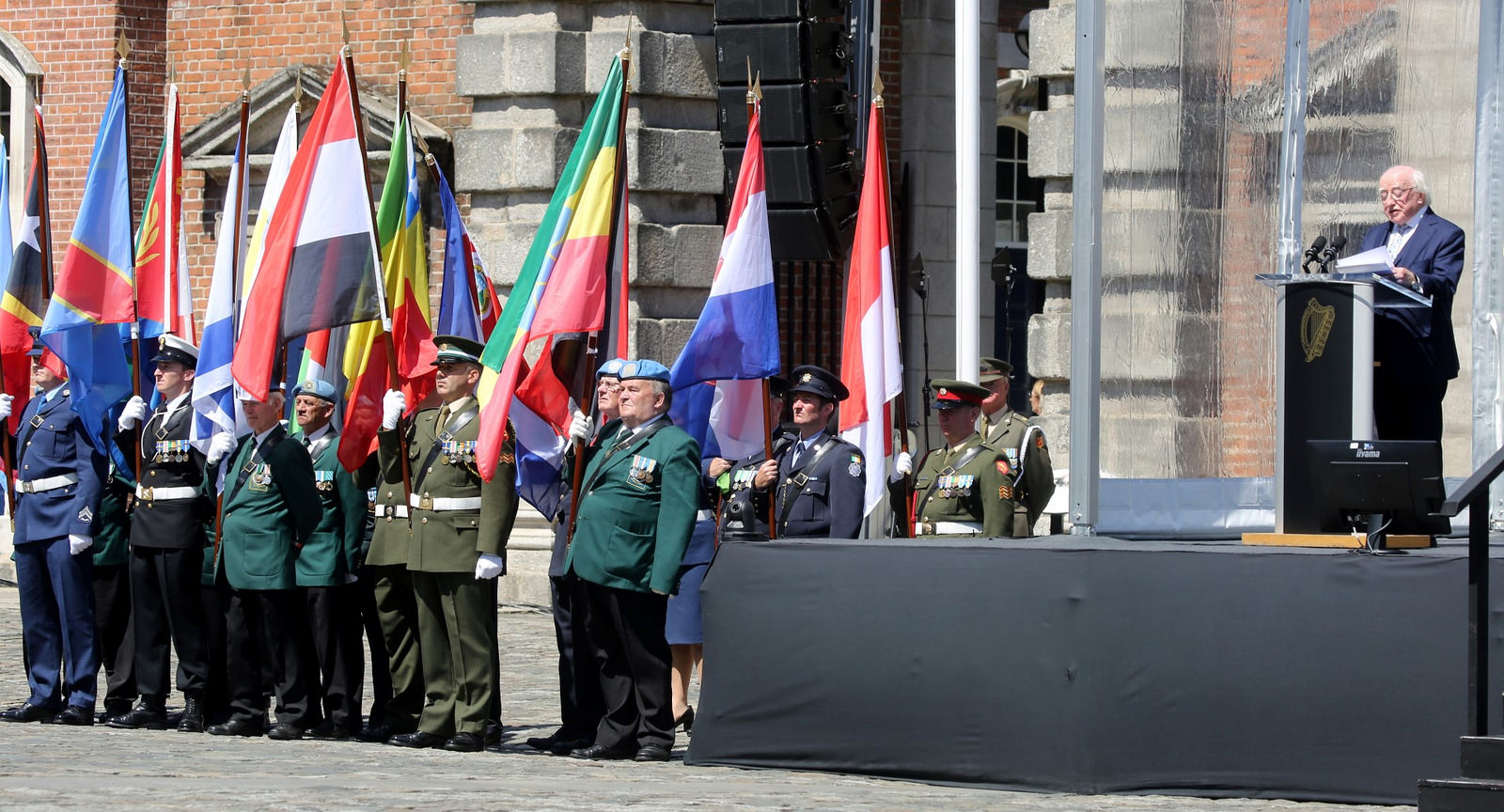 “For 60 years, not a day has passed when an Irish soldier was not on peacekeeping duty somewhere in the world. As peacekeepers, our Irish troops were not at war on behalf of Ireland but were operating in places where war was relentlessly occurring.
Since June 1958, members of the Defence Forces have manned observation posts, stood guard or patrolled a zone of separation, somewhere within the world’s most volatile places. This is a unique record and one of which the Defence Forces and the Irish people can be justifiably very proud.”
The effectiveness of the United Nations depends on its reputation as a force, for peace, for good, in the world. Ireland’s participation in UN and UN-mandated missions illustrate the very positive and practical difference that small countries, like Ireland, can make in the world’s conflict zones.
As President of Ireland, I very much welcome this opportunity to acknowledge the professionalism, the bravery, and the commitment to peace and humanitarianism that lie at the core of the Defence Forces’ engagement as peacekeepers.

On behalf of the Irish people, I wish to thank each and every one of those men and women for the part they have played, through their service all over the world, in continuing the proud tradition of Irish peacekeeping.

This tradition is an essential component of Ireland’s foreign policy, driven as it is by the very values and principles that have guided the actions of our state on the international stage ever since independence – a commitment to multilateralism and to the values of peace, international security, and global justice.

The 60th anniversary was used to remember and honour those Irish Defence Forces personnel who made the ultimate sacrifice in the line of duty. In total, 86 members of the Defence Forces and one member of An Garda Síochána have lost their lives on UN peacekeeping duty overseas. Behind that stark figure lies, of course, so much lost potential and so many families ruptured and bereaved,” said President Higgins. Our thoughts and prayers are also with those peacekeepers and their families today.

The decision by any Government to send its troops overseas on UN peace support operations is never taken lightly. The safety of our service men and women who undertake this important task must be our primary concern. We salute all of the brave women and men who serve, and have served, in peacekeeping operations around the world, and pay tribute to those who have made the ultimate sacrifice in the pursuit of peace.”

In a video address to the assembled crowd the Secretary-General to the United Nations, Mr Antonio Gutierrez commended and thanked Ireland for its steadfast commitment to peace and security saying:
“Ireland’s valuable contribution to UN peacekeeping goes well beyond the deployment of uniform personnel. Your Government have shown great leadership and support to the development of peacekeeping policy and doctrine.”

The Government is strongly committed to contributing to international peace and security. Ireland’s outstanding record on the international stage in the service of peace strengthens the values we represent as a nation, inspiring the pride of our people at home and abroad. Ireland may be a small island on the periphery of Europe, but our outlook is global. Our proud tradition of participation in peacekeeping and crisis management operations demonstrates how we can be a powerful force for peace and stability.

Today, we recognise the unwavering courage and devotion to duty of all of our civil and military peacekeepers, most especially those who have lost their lives on the frontline.

To all who have played their part over the last 60 years of peacekeeping, on behalf of the Irish Government, I thank you for your service.

Speaking ahead of the event, Minister of State with Responsibility for Defence Mr Paul Kehoe T.D. said:

“This anniversary provides an opportunity to pay tribute to the contributions of our Defence Forces personnel and veterans, who have served and continue to serve in UN peacekeeping missions, alongside our police and civilian personnel.”

For photographs of the ceremony – View our Flickr Album.