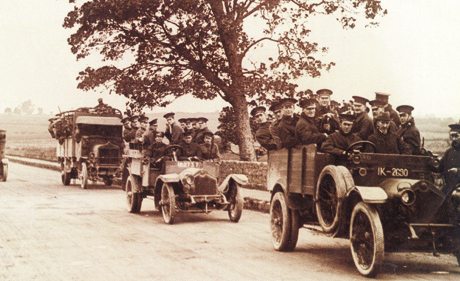 As a global information medium, the worldwide web is a major resource for those embarking on research.

As part of the programme for the Decade of Centenaries, an online archive of Ireland’s First World War records was launched in 2014. The Government of Ireland commissioned the digitising of Ireland’s Memorial Records with the support of the In Flanders Field Museum. The digitised archive, lists 49,000 Irish soldiers who died during the First World War, or who died as a result of wounds sustained during battle. The records can be searched on line by name, place of birth, rank, regiment, service number, date of death and place of burial or commemoration, where that information is known.

Visit the Decade of Centenaries Site >>

The British National Archives is digitizing the official diaries kept by army military units during World War I. The first batch of unit war diaries reveals the real-time account of the first three cavalry and the first seven infantry divisions who were part of the first wave of British army troops deployed in France and Flanders. Some diaries record little more than daily losses and map references whilst others are much more descriptive, with daily reports on operations, intelligence summaries and other material. The digitised diaries cover activity in France and Belgium.

In 2014, the first phase of material from the Military Service Pensions Collection was launched in Dublin. For the first time, the collection is being made available on a phased basis leading to 2016.

The Military Service Pensions Collection is one of the largest pieces of the archival material relating to Ireland’s revolutionary period in the lead up to independence. The Collection comprises almost 300,000 applications, files and supporting documentation. It provides an unparalleled and detailed picture of Irish Volunteers, Irish Republican Army, Cumann na mBan, Na Fianna Eireann, the Hibernian Rifles, and the National Army on active service who were casualties or wounded while on duty throughout the period from the 1916 Rising to the end of the civil war in 1923.

Through the Defence Forces Military Archives Web Site, it is now possible to explore the many testimonies and accounts of the surviving leaders, the veterans and volunteers who took part in the historic events of the 1916 Rising, the War of Independence and Civil War, along with supporting documentation gathered from the participants through the unique collection called the Military Service (1916-1923) Pensions Collection.
Under the Military Service Pensions scheme, some 15,700 persons were granted pensions. The eligibility period commenced in April May 1916 and ended on 30th September 1923. The initial portion of files placed on line refers to 3,000 individuals and includes almost 452,000 images.
Maps and sketches are to be found throughout the Military Service Pensions Collection. These were created to illustrate and plan military actions, ambushes, to depict boundaries between companies and battalions and to show areas of responsibility of local IRA units.
The release of these records to researchers will transform the scholarship of the period. It provides Irish people at home and abroad with fascinating and copious information about their ancestors who played a part in the establishment of independent Ireland.

For the information of researchers, a directory of Websites and Archives is provided on this web site under Directory Listings.

The Trust encourages those in charge of web sites to provide information on their facility for posting in this web site. Likewise, any necessary changes to the information concerning these web sites posted on the Trust’s web site would be welcomed.