Cork County Council’s award winning tourist attraction Spike Island celebrated the 80th anniversary of the handover from Britain to Ireland of the Treaty Ports with a ceremony attended by almost 400 guests, including the Mayor of the County of Cork Cllr Patrick Gerard Murphy, GOC 1 Brigade Brigadier-General Patrick Flynn, and Cork County Council Chief Executive Tim Lucey.  The descendants of some of the Irish Army, who took control of the fortifications on Spike Island, were among the guests at the commemoration. 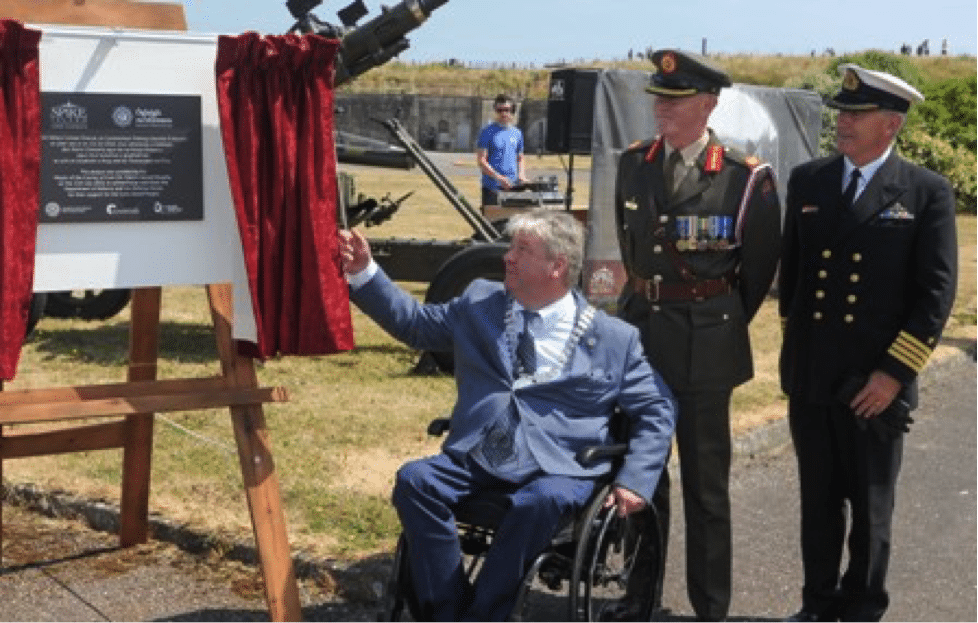 An account by a witness in Cobh recorded the events in a letter to her sister;

We got in just as the Tricolour crept up the flagstaff on Spike Island and in all my life I never before felt anything like the sensation I got when that flag went up. All the crowd roared as loud as their lungs could go, they jumped, clapped and waved their hats, even as I think of it I could still break my heart crying. I was grand. The pipers on the mainland then played the National Anthem and there was no more to be seen than only the flag flying over the harbour. There was just a lovely breeze there and it used allow the flag to open its folds and then it would lift up itself and wave! – (July 12th, 1938) 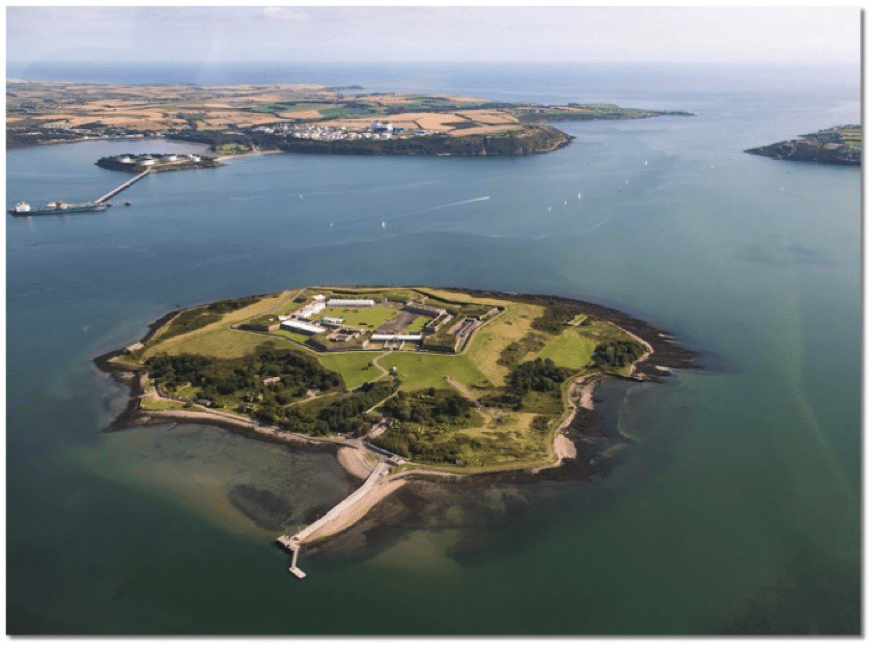 Speaking at the 80th Anniversary on 11 July 2018, Mayor Murphy noted how even after the Treaty of 1921, the harbour forts were considered so important it took a further 17 years before Fort Westmoreland on Spike island would come under Irish control for the first time.

Since the handover of 1938 Spike Island has been used by the Irish Army during ‘the Emergency’, as World War 2 was known in Ireland – right up until 1979 before it was handed over to the Irish Naval Service, became a prison once again in 1985, serving this role until 2004. Spike Island has now begun a new chapter in what is an incredible history. It is now a top tourist success, thanks to the people of Cork who have invested and believed in the potential we have around us.

Cork County Council Chief Executive Tim Lucey spoke of how the Council realised the huge potential of Spike Island and the ongoing plans to continue to develop the island.

Spike Island has welcomed close to 100,000 visitors and almost doubled its numbers in 2017 to 45,000 visitors annually. The island now has over 10 full time employees and up to 40 seasonal part time workers, and in 2017 the attraction contributed an estimated 6.5 million Euro to Cobh’s economy. We have ambitious plans to increase the ferry capacity, add an international welcome hub on the pier, all with the specific focus of increasing international visitors to the island, making the attraction self sustainable and a jewel in the crown of Muster tourism.

Spike Island’s General Manager John Crotty said that “On that day in 1938 our island nation grew just a little larger in size, but infinitely larger in stature”.

The island is now set to apply for a second round of funding to further develop the site in 2019, with an application for co-funding by Cork County Council and Fáilte Ireland to fund Phase 2 works. 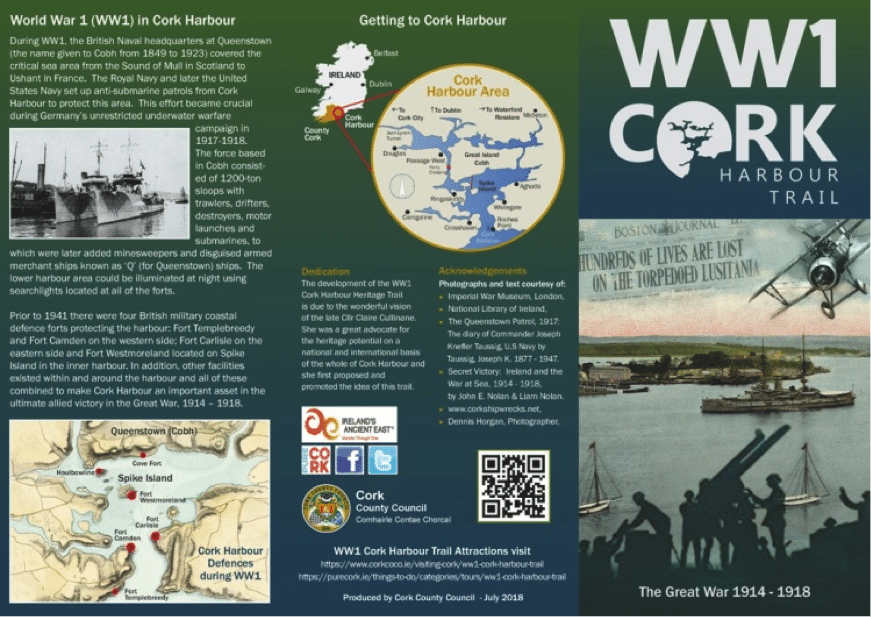 Cork County Council recently launched the World War 1 Cork Harbour Trail. The trail sets out a number of key locations within the Harbour chosen for the role they played during World War 1.
During World War 1, the British Navy headquarters at Queenstown, (the name given to Cobh from 1849 to 1923) covered the critical sea area from the Sound of Mull in Scotland to Ushant in France. The Royal Navy and later the United States Navy set up anti-submarine patrols from Cork Harbour to protect this area. This effort became crucial during Germany’s unrestricted underwater warfare campaign in 1917-1918.

The maritime force based in Cobh consisted of sloops with trawlers, drifters, motor launches and submarines, to which were later added minesweepers and disguised merchant ships known as ‘Q’ ships. In addition to its military role, the Harbour was vital for the export of agricultural produce to the mainland UK and for the export of Irish horses and other supplies so essential for the war effort carried on an assortment of steamers, mail boat, ferries and a variety of small and large vessels.

Four British military coast defence forts protected the harbour during the First World War, namely: Fort Templebreedy and Camden Fort Meagher on the western side; Fort Davis (Carlisle) on the eastern side; and Fort Mitchel (Westmoreland) located on Spike Island in the inner harbour.

Today, most of the sites in Cork Harbour which played a vital role during World War 1 have been developed by Cork County Council into tourist attractions. Camden Fort Meagher, Spike Island, and the Cobh Heritage Centre have benefited from major investment from the Council and continue to attract visitors to the Harbour area in growing numbers. The World War 1 trail is another feature enabling visitors to discover the vast history of the area.

Fort Davis and Fort Templebreedy remain the property of the Department of Defence.

The Harbour Trail project has been fully designed and funded by Cork County Council. The development of the trail is due to the vision of the late Cllr. Claire Cullinane RIP who was a great advocate for the heritage potential of the whole of Cork Harbour and who initially proposed the trail.