Throughout Ireland, the National Day of Commemoration, An Lá Comórtha Náisiúnta, took place on Sunday, 08 July 2018. This year the principal event was held at Collins Barracks Dublin, rather than the Royal Hospital Kilmainham. Events were also held in Cork, Kilkenny, Limerick, Sligo and Galway.

The purpose of the commemoration is to remember all those Irish soldiers who lost their lives in war or with the United Nations.

The National Day of Commemoration occurs on the Sunday nearest to the 11 July, the anniversary of the date in 1921 when a truce was signed ending the War of Independence.
The first National Day of Commemoration was held on 13 July 1986 in the Garden of Remembrance during which a commemorative plaque was unveiled by President Patrick Hillery. The ceremony was moved to the Royal Hospital Kilmainham in 1987. Due to structural renovations, the 2018 event was moved from Kilmainham to Collins Barracks.

Built in 1702 and known as The Barracks and later The Royal Barracks, Collins Barracks was handed over to the Irish Free State in 1922, and was the longest occupied military installation in Europe until 1997, at which stage the Defence Forces handed the Barracks over to the National Museum of Ireland. One of four sites of the National Museum of Ireland, Collins Barracks has a wide range of galleries including the Soldiers and Chiefs Exhibition.

The Commemorative Plaque carries the following inscription: “In honour of all those Irishmen and Irishwomen, who died in past wars, or on service with the United Nations”.

The military and religious ceremony in Dublin were held in the presence of the President, the Taoiseach and other members of the Government of Ireland, members of the Oireachtas, the Council of State, the Diplomatic Corps, the Judiciary, the Defence Forces, next-of-kin of those who died on service with the United Nations, Northern Ireland representatives, a wide cross-section of the community, representatives of Regimental Associations and Veterans Associations, and a considerable number of ex-servicemen and ex-servicewomen. Members of the Military Heritage of Ireland Trust CLG, with guest, received invitations for the event.

The ceremony commenced at 1100hrs with the arrival of An tUachtarán Michael D. Higgins and the inspection of a Captain’s Guard of Honour, drawn from the three components of the Defence Forces namely the Army, Naval Service and Air Corps.

Representatives of the Islamic Cultural Centre, the Church of Ireland, the Methodist Church of Ireland, the Coptic Orthodox Church, the Presbyterian Church, the Roman Catholic Church and the Jewish community on Ireland participated in a multi-faith act of Commemoration, each according to their own tradition, followed by a reflection on behalf of the Humanist Association of Ireland.
Music interludes were provided by the Ms Sandra Oman – Sololist, the Band of 1 Brigade, and Pipers from the School of Music, under the direction of Captain Brian Prendergast.

The President laid a wreath on behalf of the people of Ireland. This was followed by a period of one minute’s silence terminated by the firing of a 25 Pounder Gun Howitzer by the
2 Artillery Regiment. Military honours were rendered by a Cadet Guard of Honour, with instrumentalists from the Army Number 1 Band sounding the Last Post and Reveille.

The ceremony was concluded with the playing of The National Anthem and a fly past flown by PC9s from the Air Corps. 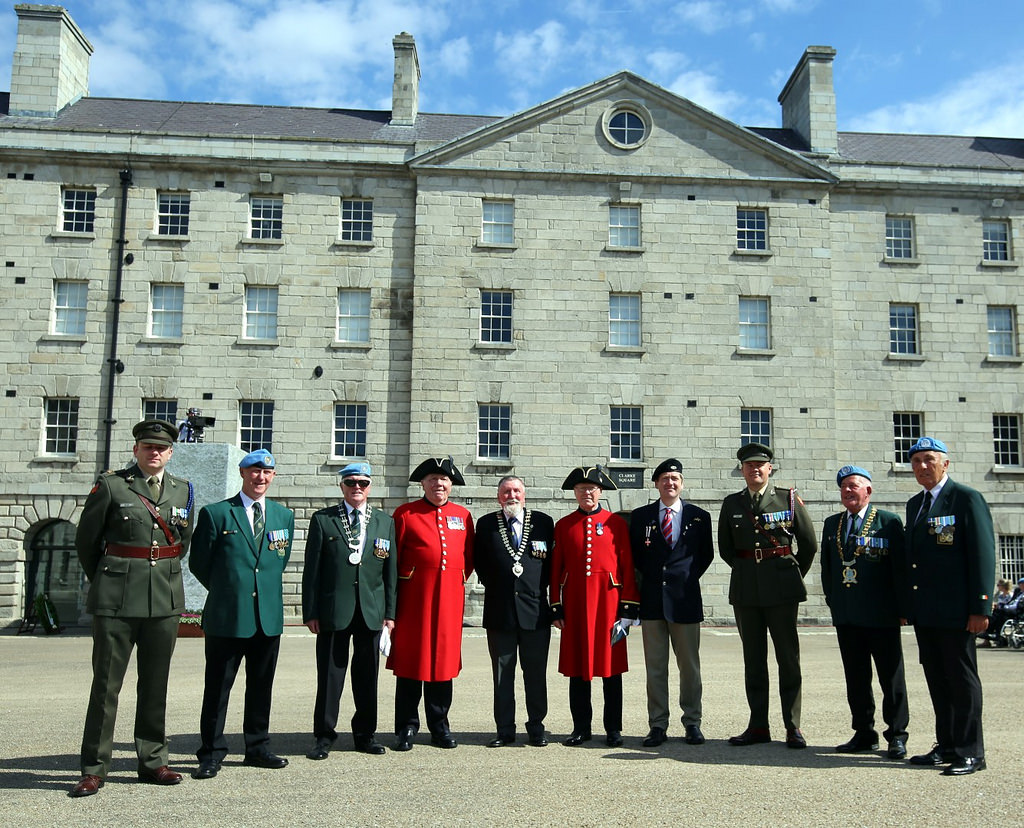 After the ceremony, the Military Heritage of Ireland Trust CLG hosted a luncheon on behalf of the Department of An Taoiseach in the Palatine Room. Reinforcing the cross-border nature of the Trust’s activities, attendees included representatives of the Combined Disbanded Irish Regiments Association, Royal British Legion, Royal Irish Regiment Association, Royal Ulster Rifles Association, the Somme Heritage Centre, the Royal Irish Fusiliers Museum, the Royal Inniskillen Fusiliers Museum, and the RUC Federation. 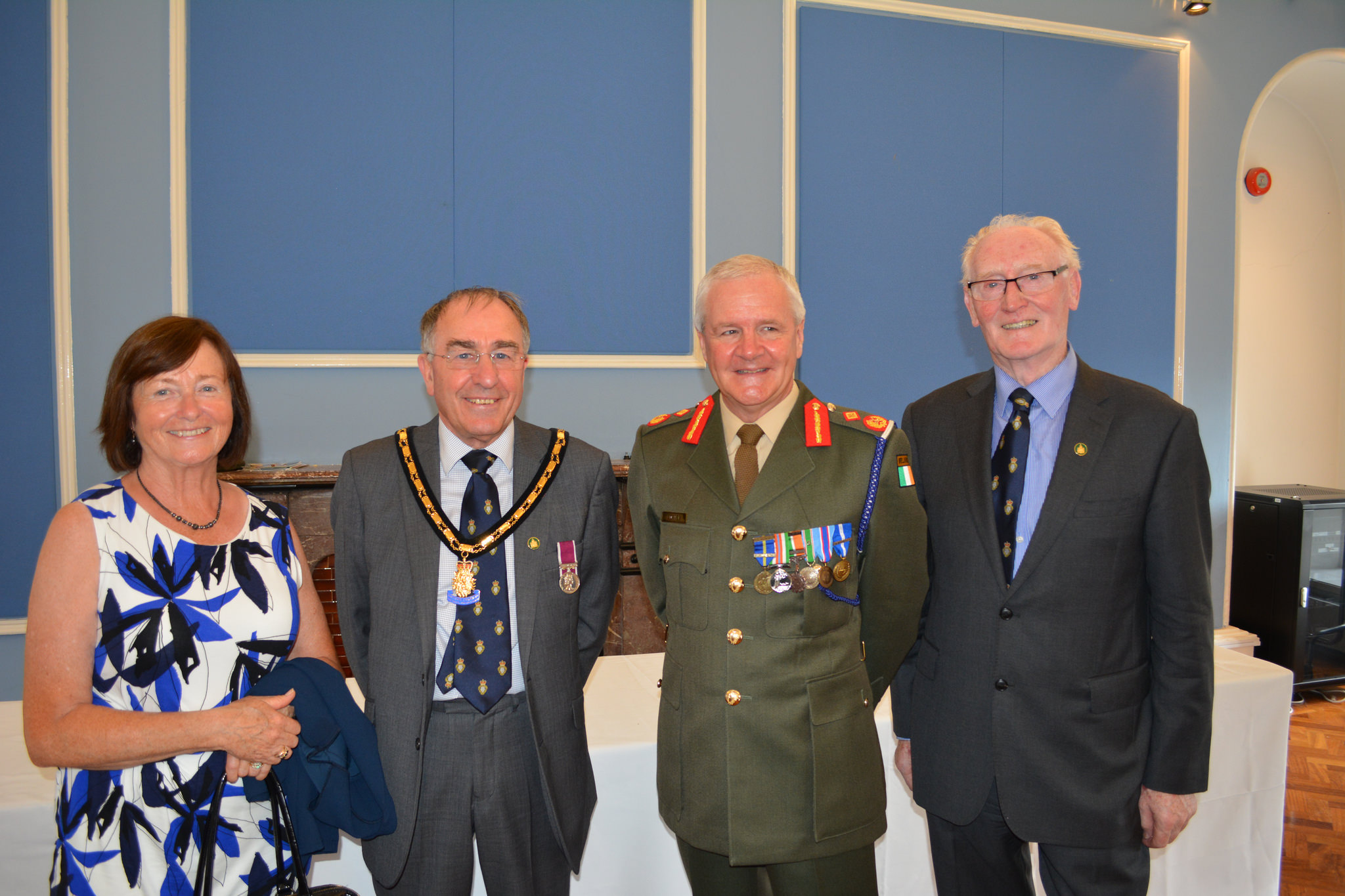 In addressing the attendees, the Trust’s Chairman Brigadier-General Paul Pakenham (Retd) stated, inter alia,
“Today, we recall with gratitude and respect, all Irish Soldiers who were exposed to the hostile and volatile actions that occurred in areas of conflict, including peacekeeping, and especially those who made the ultimate sacrifice with courage and conviction.

In particular, we recall those 81 Soldiers who died on 08 July 1918, some 4 months before Armistice Day,

No single tradition, narrative or perspective, is diminished, by honouring and remembering the extraordinary self-sacrifice and courage of some 35,000 Irish Soldiers who died in the First World War.
I am confident that this theme will be reflected in the commemorations associated with the 100th Anniversary of Armistice Day next November.”