A Long Week in March: The 36th (Ulster) Division in the German Spring Offensive, March 1918

The 36th (Ulster) Division are widely regarded as being the most successful British Infantry Division in terms of ground gained on the opening day of the Battle of the Somme. The casualties suffered then had a deep impact in the towns and villages of Ulster. In March 1918, however, the Division came close to annihilation as they bore the brunt of the German attack at the beginning of the Spring Offensive and remarkably suffered greater casualties than they did at the Somme.

Written by Michael Nugent, a Director of the Military Heritage of Ireland Trust and Manager of WW1 Research Ireland, “A Long Week in March: The 36th (Ulster) Division in the German Spring Offensive, March 1918” will be formally launched in the Public Records Office Northern Ireland (PRONI), Titanic Quarter, Belfast, on 28 February, at 1900hrs. 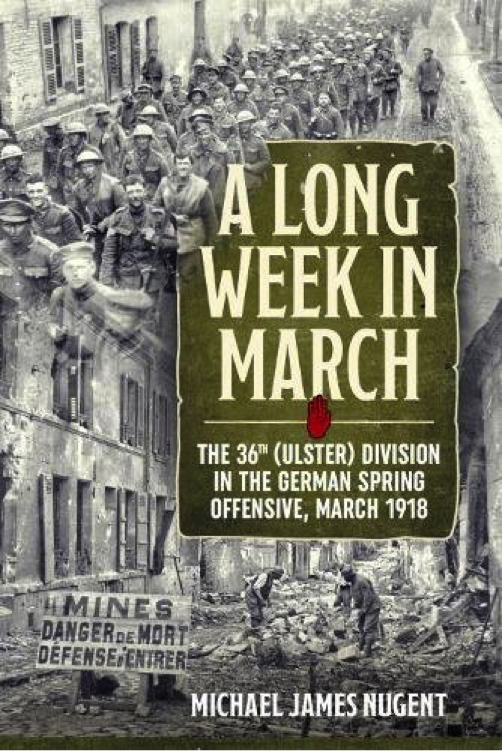 In this unique and fascinating account, Michael Nugent examines the factors beyond the control of those in the Division which led to them holding the front line opposite the northern French town of St Quentin on the morning of 21 March. These include problems with recruitment in Ireland, the lack of reinforcements being sent to the front, the reorganisation of the British Army in early 1918, and the imposition of a new defensive system which few in the infantry had any faith in.

The opening day of the battle is scrutinised in detail, with the experiences of each of the Infantry battalions forming the Division being analysed. In the case of 12th and 15th Battalions Royal Irish Rifles, this is the first time an account of the actions of this momentous day have been committed to print.

The accounts are drawn from battalion war diaries, personal accounts and the regimental history of the German attackers which provides a fascinating insight and helps to corroborate accounts from the Ulster Division. The actions leading to the award of the two Victoria Crosses won by the Division in the last week of March are investigated, with new information, particularly concerning the award to 2nd Lieutenant Edmund de Wind being made available.

Each day of the withdrawal is investigated with important events being analysed in detail, including the ‘last stand’ of the 2nd Battalion Royal Irish Rifles on 24 March and the Cavalry Charge by elements of the 3rd Cavalry Division on the same date, which undoubtedly saved an organised withdrawal from becoming a rout.

A chapter is devoted to the analysis of casualty figures with each of the fatalities identified and their details contained in an appendix. The varied experiences of those taken prisoner is also examined using personal accounts which highlight that the German Prisoner of War system was overwhelmed by the initial success of its Army.
Ultimately the book proves that although under severe pressure, the Ulster Division with typical obstinacy, bent, but never broke and emerged at the beginning of April 1918 in a position to play a full part in the final drive to the Armistice.

“A Long Week in March” is Michael’s second book. In 2015, he published “It Was an Awful Sunday: The 2nd Battalion Royal Inniskilling Fusiliers at the Battle of Festubert 15-17 May 1915”. This particular book covers the experiences of the 2nd Battalion Royal Inniskilling Fusiliers from August 1914 to the Battle of Festubert in May 1915 where they suffered
65 percent casualties. 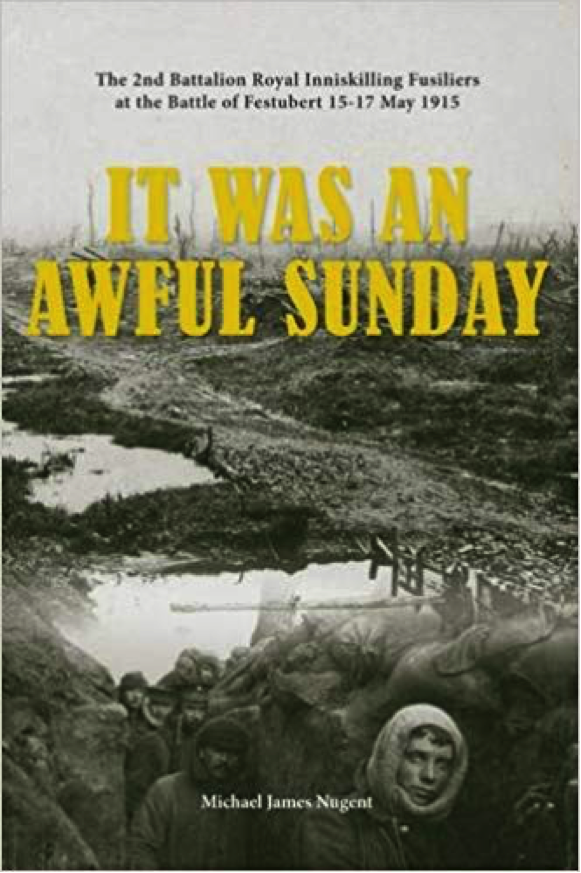 Including many personal accounts, it tells the story of the officers and men of a closely knit battalion recruited from across the community in the North of Ireland. The book goes on to examine the impact that the tactics of both the Empire and German Forces at the battles of Neuve Chapelle and Aubers Ridge, and the subsequent ‘Munitions Crisis’ had on the conduct of the battle of Festubert.
The daily life of the soldiers throughout the winter of 1914/15 is covered along with the bearing that the topography and weather conditions had on the outcome of the battle. The post battle impact on individuals and the battalion as a unit are also covered in detail.