Throughout Ireland, a series of events took place marking the centenary of Armistice Day and commemorating those who died in the First World War.

Following a wreath laying ceremony at the cenotaph in the Garden of Remembrance in the grounds of Belfast City Hall, Tánaiste and Minister for Foreign Affairs and Trade Mr Simon Coveney TD said Armistice Day was “a momentous day for the whole of Europe”. 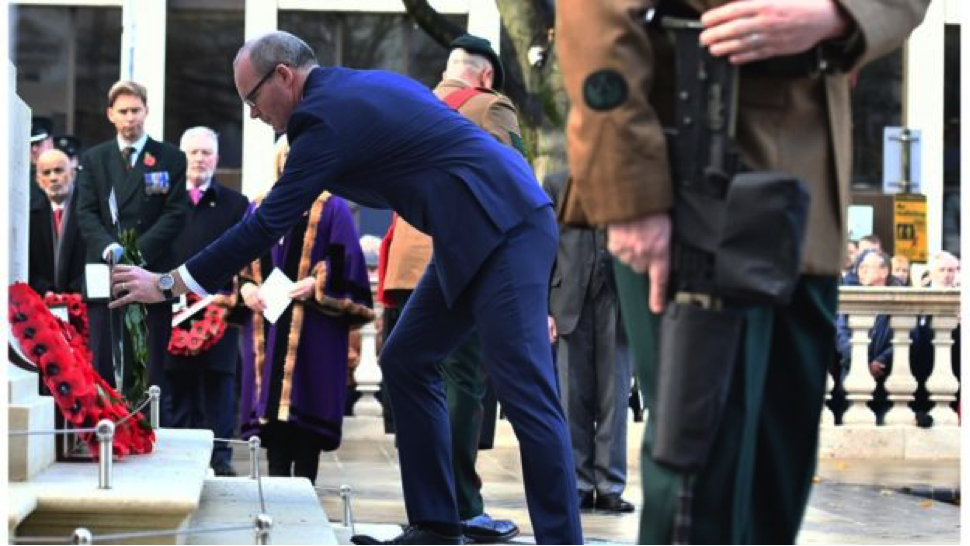 Speaking to reporters after he placed a laurel wreath on the cenotaph, he reflected on the 200,000 Irish men and women who fought in the first World War, 40,000 of whom never returned. Minister Coveney said:

We have a shared history of tragedy that deserves respect and deserves to be remembered appropriately. During a time when Europe was pausing and reflecting on lessons learned it was very important to be in Belfast on behalf of the Government and the people it represents. I chose to be in Belfast, it is where I wanted to be and I hope in a small way it reaches out to some who may see the Irish Government through a different lens perhaps.

An interdenominational service led by Dean of Belfast Stephen Forde including specially commissioned musical items, alongside poignant poetry readings was held in St Anne’s Cathedral in Belfast. The leader of the Catholic Church in Ireland Archbishop Eamon Martin, the Church of Ireland Primate Dr Richard Clarke, the Presbyterian Moderator Dr Charles McMullen and the Methodist President Rev Bill Davison participated in the service. 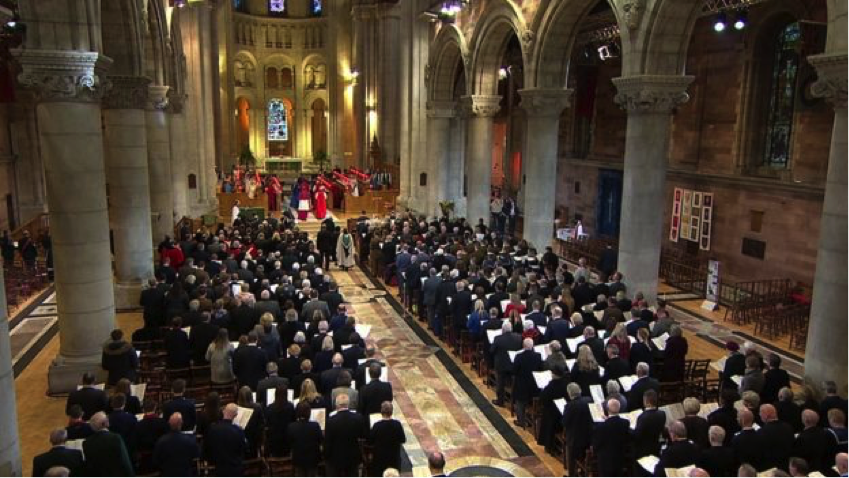 The Duke of York attended the service and gave a reading during the ceremony. Northern Ireland Secretary Karen Bradley and Democratic Unionist MP Jeffrey Donaldson were also in attendance. 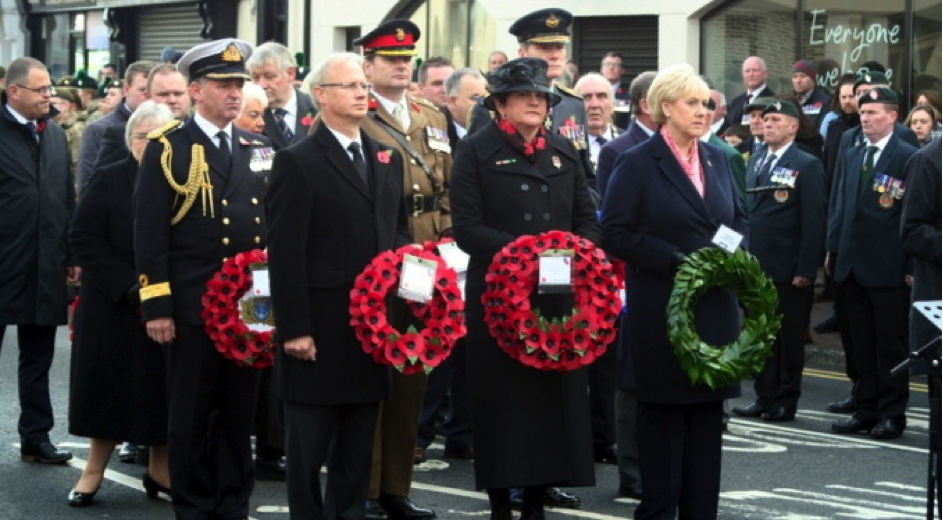 .Mrs Humphreys laid a wreath of green laurels alongside the many red poppies at the County Fermanagh town’s war memorial.

A Remembrance Service followed in St Macartin’s Cathedral. The Service was led by The Very Rev J Hall, assisted by Curate The Rev. Chris MacBruithin, and by the Parish Priest from neighbouring St Michael’s, The Right Rev Monsignor Peter O’Reilly. The Preacher was the Bishop of Clogher, The Right Rev John McDowell

Photograph of the Enniskillen event courtesy of Danny Tiernan.

An Armistice Centenary People’s Remembrance, organised by the Royal British Legion (ROI), took place at the National War Memorial in Islandbridge. The Government was represented by Mr Patrick O’Donovan TD, Minister of State at the Department of Finance, Public Expenditure and Reform.
The short ceremony commenced at 1040hrs with a parade of the standards of Royal British Legion, Regimental and Veteran Associations. This was followed by a short ecumenical service of remembrance, a two-month silence at 1100hrs, and the laying of official wreaths by public representatives, members of the diplomatic corps, and veterans’ representatives. 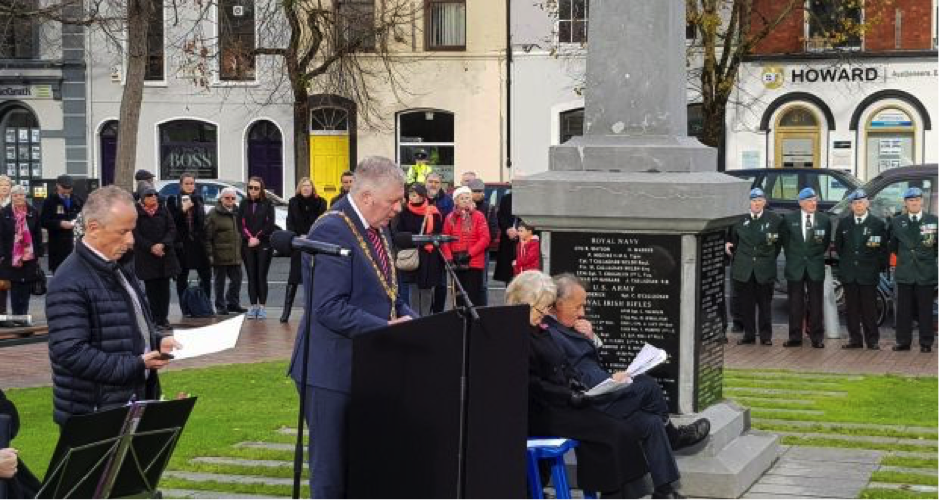 The Lord Mayor of Cork Cllr Mick Finn hosted an Armistice Day Commemoration at the Cenotaph on the South Mall, in honour of the 4,500 Cork men and women who died during the First World War.

Speakers included David Daly of the Royal British Legion and Denis Kirby of the Western Front Association who read from a letter by veteran, John O’Flynn written in December 1918 in which he recalled how they had gone to war “in the name of Ireland”.
An inter denominational service was conducted by the Catholic Bishop of Cork and Ross, Dr John Buckley, Rev Geraldine Gracie of the Methodist Church and by David Coon on behalf of Cork’s Jewish Community, before wreaths were laid by Lord Mayor Finn and others at the Cenotaph. The Church of Ireland Bishop of Cork Paul Colton delivered an oration at the City’s War Memorial on Grand Parade.

Under the command of Lieutenant Paul Fleming, an Honour Guard, drawn from the 1 Cavalry Squadron rendered honours, when the Last Post and Reveille were sounded. The National Anthem was sung by Ciara O’Sullivan.

Representing the Irish Government, the Minister for Finance Mr Paschal Donohoe TD attended the annual Service of Remembrance commemorating Ireland’s war dead in the National Cathedral and Collegiate Church of St Patrick, Dublin on Sunday, 11 November.  The service was organised by the Royal British Legion Republic of Ireland. During the service, Mr Paschal Donohoe and Lieutenant-Colonel Ken Martin (Retd), President of the Royal British Legion (ROI) laid wreaths at the War Memorial in the north transept.

The service was led by the Dean, the Very Revd William Morton and sung by the Cathedral Choir. Lessons were read by the H.E. Mr Robin Barnett CMG the British Ambassador to Ireland and Major Brian Duffy Chairman Royal British Legion (ROI). The exhortation was led by Lieutenant-Colonel Ken Martin (Retd), and was followed by the Last Post, the Reveille and the Kohima Epitaph. The sermon was preached by the Dean of St Patrick’s Cathedral in Armagh Rev Gregory Dunstan. He praised the “generosity and inclusiveness” of the last four years which he said had seen the “recovered memory” of those who died in the war. At the same time, Irish people honoured “those whose courage and sacrifice are in the title deeds of the State”. 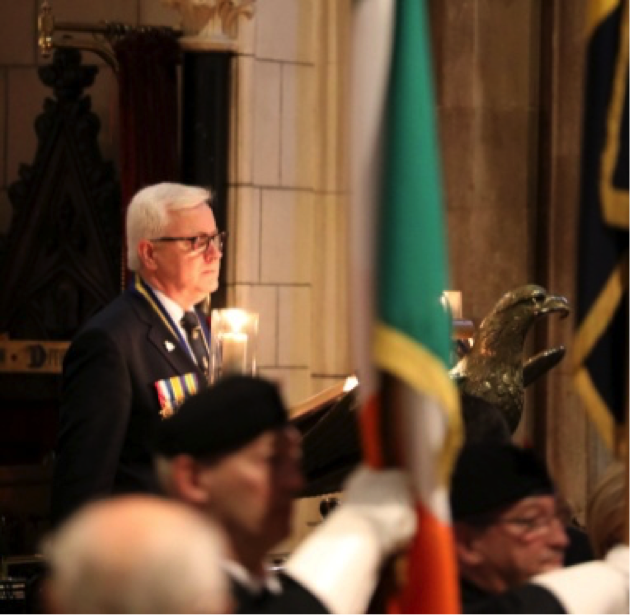 The Minister for Finance, Paschal Donohoe, represented the Irish Government. Attendance also included the ambassadors of the United Kingdom, the New Zealand, Australia, Germany and France, the Chief of Staff Vice-Admiral Mark Mellett DSM, the Garda Commissioner Mr Drew Harris, and representatives of Veteran Associations and Regimental Associations.
The Military Heritage of Ireland Trust CLG was represented by its Chairman, Brigadier-General Paul Pakenham (Retd), also in attendance were Colonel Harvey Bicker (Retd) and Brigadier-General Paul Fry (Retd) both of whom are Directors of the Trust.

Photographs of the service in St Patrick’s Cathedral courtesy of Patrick Hugh Lynch.

View Our Flickr Gallery of Images of this Event >> 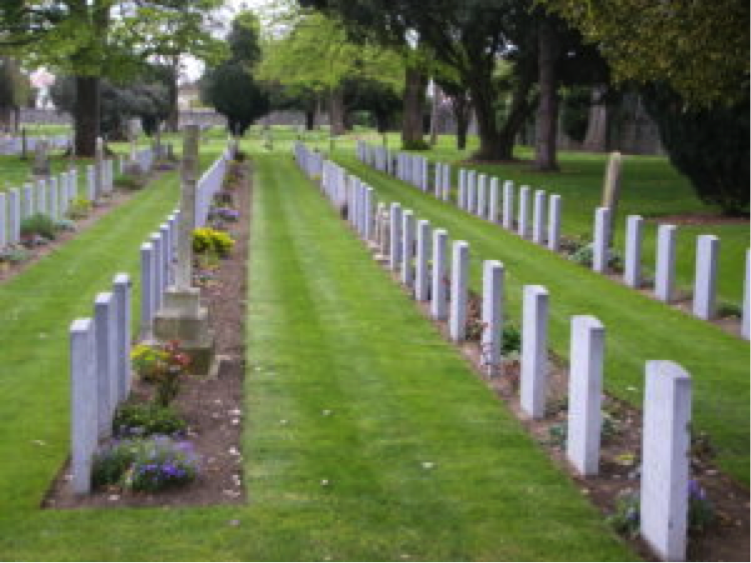 A Sundown Service, conducted in Grangegorman Military Cemetery marking the centenary of Armistice Day, was organised by the Royal British Legion (ROI).
The ceremony of light was inspired by Laurence Binyon’s poem, For the Fallen, which contains the famous line “At the going down of the sun and in the morning, we will remember them”.

Tea lights were placed on majority of the 623 graves of those who were killed in the First World War and are in buried in the cemetery, prior to the ceremony to become more visible as night fell. At sunset, the parade of Regimental Standards was followed by the illumination of the remaining graves by members of Irish youth organisations and veterans. This was followed by a short ecumenical service by the Very Revd Tim Wright, Dean of Kildare Cathedral, and concluded with a two-minute silence.

Relatives of Company Sergeant Martin Doyle placed a light on his grave. He won the Victoria Cross in September 1918, and later joined the IRA, the National Army and the Defence Forces. Earlier on 11 November, a Commemorative Stone was unveiled in his honour in Glasnevin Cemetery, along with those of four other Irish Victoria Cross recipients.

During a commemoration service held in St Brigit’s Cathedral, Kildare on Sunday 04 November, the congregation was provided with a booklet listing the names and particulars of those who died in the First World War from the Dioceses of Meath and Kildare.