On 7th June, the centenary of the start of the Battle of Messines Ridge, an island of Ireland commemoration, jointly led by the Governments of Ireland and the United Kingdom, in partnership with the Mayor of Messines, took at the Island of Ireland Peace Park. 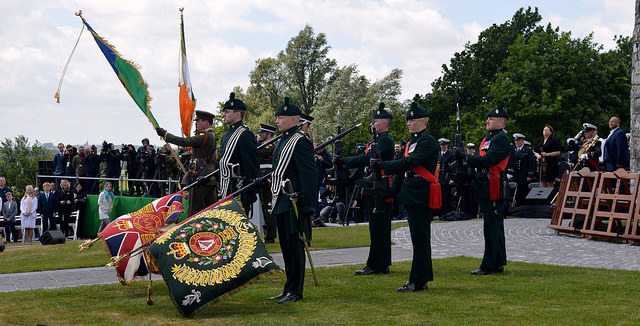 A century ago, men and women from across the island of Ireland took part in the Battle of Messines in Flanders, Belgium. The battle was a preliminary engagement intended to prepare the way for a much wider Allied offensive in and around the Belgian city of Ypres (Ieper). The objective was to capture a strategically important ridge in the vicinity of Messines and Wytschaete. The successful week-long engagement was notable for two things: one of the largest uses of conventional explosives in history; and the fact that the 16th (Irish) and 36th (Ulster) Divisions, largely composed of personnel of the diametrically opposing Irish National Volunteers and Ulster Volunteers, ended up fighting alongside one another in one of the British Army Corps that took part in the offensive.

Attended by An Taoiseach Me Enda Kenny TD, the Duke of Cambridge Prince William, and Princess Astrid of Belgium, the ceremony reflected the spirit of reconciliation which the two Divisions have come to symbolise. Former Stormont First Minister Arlene Foster was among the invited dignitaries. The Minister for Foreign Affairs, Mr Charlie Flanagan TD, the Minister for Arts and Heritage Heather Humphreys TD and the Minister of State with Responsibility for Defence Paul Kehoe TD were in attendance. The Northern Ireland Office was represented by Lors Dunlop.

Over 700 attended the ceremony, including the Defence Forces Chief of Staff Vice-Admiral Mark Mellett DSM and the UK Defence Attaché Colonel Max Walker. Personnel of the Defence Forces and the Royal Irish Regiment provided Colour Parties and rendered military honours.

In addition to the official wreaths, including wreaths from the Australian and German governments, a considerable number families and Veterans Associations also laid wreaths, including the Connaught Rangers, the Dublin Fusiliers, the Leinster Regiment, the Royal British Legion, the Organisation of Ex Servicemen and Women, and the Irish UN Veterans Association.
The Island of Ireland Peace Park in Messines was built in 1998 – the year of the Good Friday Agreement – to mark the sacrifice of all Irishmen who fought and died in the First World War.
Mr Kenny and Prince William also visit nearby Wytschae Military Cemetery, where many of those who died in the Battle of Messines were buried, including Major Willie Redmond MP and paid their respects at the 16th Irish Division Memorial Cross in a private ceremony before meeting family members of servicemen buried in the cemetery. The village of Wytschaete was captured by the 36th and 16th during the Battle of Messines. 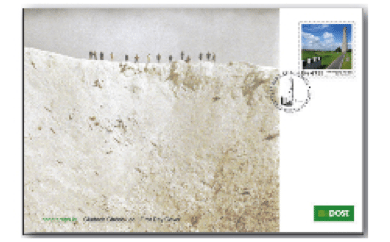 On 08 June, 2017, An Post issued a stamp marking the 100th Anniversary of the Battle of Messines. This stamp was designed by Ger Garland and features the Round Tower from the Island of Ireland Peace Park.

The capture of Messines Ridge was a key objective of the Allied Forces ahead of their mid-summer 1917 offensive on German lines between the nearby town of Ypres and the small village of Passchendaele – a battle that has since become synonymous with the horrors of trench warfare.

The Allies sustained around 10,000 casualties during the Battle of Messines, the Germans around 25,000. Despite the success of this particular battle, the 36th and 16th Divisions lost around 2,500 men.  It was one of two occasions when Protestant and Catholic soldiers from Ireland fought side by side on the Western Front.  On the second occasion, both Irish Divisions fought together, during the attack on Langemark, and during the ill-fated Passchendaele offensive.