Situated in the vicinity of Christ Church Cathedral, and within the Peace Garden, the Flanders Fields Memorial was inaugurated on 30 April, more than 100 years after the end of the First World War. The ceremony was jointly organised by Dublin City Council and the Government of Flanders. During the First World War, more than 13,000 Irishmen died in Belgium, the majority of whom died in the Ypres salient located in Flanders. Pupils from St Enda’s Primary School in Dublin carried the soil from the four provinces to the memorial.

Thereafter, soil from Flanders was buried with the soil from the four provinces of Ireland within a circle of Leinster granite, reflecting the circular design in the roof of the Menin Gate in Ypres. A plaque honours all Irishmen, from the island of Ireland, who died in the First World War.Benches of Belgian blue stone, engraved with the crests of Ireland’s four provinces Leinster, Munster, Ulster and Connacht surround the Memorial.
It is envisaged that the Memorial will include engravings of Francis Ledwidge’s poetry, poet and soldier, who died in 1917 at the battle of Passchendaele.  Attendance at the ceremony included the Lord Mayor of Dublin, Councillor Nial Ring, the Minister of State for European Affairs, Ms Helan MacEntee TD, H. E Pierre-Emmanuel De Bauw, Ambassador of Belgium to Ireland, the German Ambassador, H.E. Mr Deike Potzel, the Speaker of Flemish Parliament Mr Jan Peumans, Archbishop Michael Jackson and Dean Dermot Dunne, and representatives of the Defence Forces.
Musical honours were rendered by buglers drawn from the Royal Ypriana Band from Ypres. Schoolchildren from Ireland, Flanders and Germany recited a prayer and the ceremony was completed with the Christchurch choir performing the European anthem Ode to Joy. 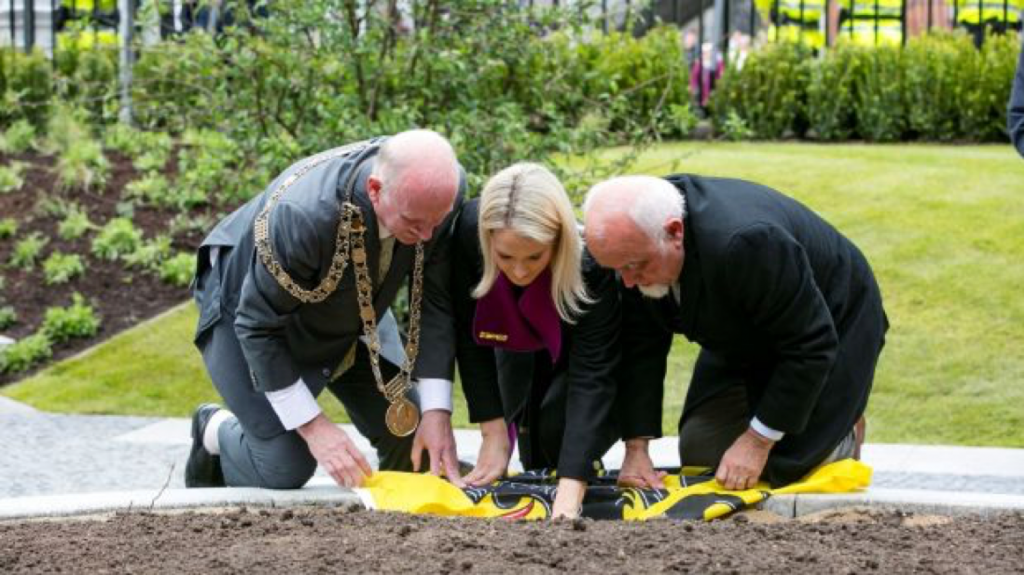 Speaking at the ceremony, the Lord Mayor of Dublin, Councillor Nial Ring stated that:

I accept this gift from the people of Flanders.  People will find great solace and hopefully a time for reflection and reconciliation when they visit this place.
The First World War may be a hundred years behind us, but the inalienability of the rights of all human beings, respect for freedom and democracy, are as relevant today as they were then. Maybe more so, because today too many people and countries take them too much for granted. Flanders will always show its profound gratitude for the extraordinary generosity and support of the Irish people in its hour of need. The Flanders Fields Memorial, uniting soil from Flanders and the four provinces of Ireland, will be an eternal testimony to our great and unwavering friendship.

In some respects, Ireland’s journey of First World War remembrance during this decade of centenaries began with Taoiseach Enda Kenny’s tour of Flanders with Prime Minister David Cameron in 2013.  Given the intertwining histories of Ireland and Flanders, the memorial is deeply moving and poignant and a symbol of the ties that bind us together. The memorial today brings together soil from the resting places of Irish people who died in Flanders and soil from their home provinces. I commend Dublin City Council for this initiative. This memorial will stand as a monument to our shared history and I thank the people of Flanders for the care of our dead over the last 100 years,

We remember with emotion all people from this island who served in World War I. They fought for peace in their own time and for us today. Peace is the most treasurable value for us human beings. If the terrible sacrifices of World War I taught us one thing, it’s this: we should, and we can live together in peace.

We are here not to honour military glory. We are united in remembering the human price to safeguard our peace and human rights. We are here to honour the Irishmen who came to Belgium each for reasons of their own to restore the liberties of an invaded neutral country. The human price paid to safeguard peace and human rights and the message of tolerance and reconciliation are an essential part of remembrance for Flanders.