President Kennedy’s visit to Ireland in 1963 was the first visit of an American President to the land of his forefathers. The visit took the country by storm at the time and required the involvement of a large number of units of the Defence Forces in ceremonial events. One such event was a wreath laying ceremony at Arbour Hill at which members of the 36th Cadet Class performed the ceremonial drill under Lt Frank Colclough (later Brig General).

The RTE film footage of the event shows the camera focused almost entirely on the President while it clearly shows him looking in the direction of the cadets as they performed their drill. On return to the United States he requested a filmed record of the entire visit including the Arbour Hill ceremony and, in particular, the cadet ceremonial drill. As the footage did not include coverage of the drill, the 37th Cadet Class (the 36th having moved on after commissioning) was tasked with proceeding to Arbour Hill where the drill was re-enacted for the camera and the results forwarded to the White House in Washington. Apparently, it was shown by the President to many a distinguished visitor, a fact noted by his wife, Jacqueline.

A few months later that year the assassination of the President shook Ireland and the world. As plans were being made for the State funeral, Mrs Kennedy recalled her husband’s admiration of the cadets ceremonial drill and requested an Irish Cadet Honour Guard to render honours at his graveside. The Irish government immediately acceded to the request and, as a result, the day before the funeral twenty six cadets of the 37th Cadet Class found themselves on an Aer Lingus Boeing 707 flying with President De Valera to Washington in compliance with the first lady’s wishes. Also included in the party were O.C. Cadet School, Lt Col Cyril Mattimoe (later Col), Captain Kevin Duffy (later Maj General) and Lt Colclough, who would again be the officer of the guard. The rest is history and featured in an excellent Nemeton TV documentary shown on TG 4 under the title “Kennedy’s Cadets”. 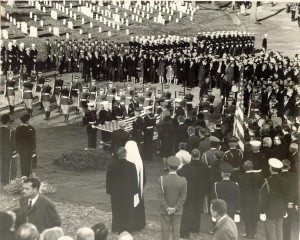 The following year, January 1964, Mrs Kennedy wrote to President De Valera to thank him for coming to her husband’s funeral “and for bringing with him the Irish Cadets – who had moved him a few months before in Ireland – and who then moved the world at his grave”
Fast forward to 2011 and at a reunion of the 37th Cadet Class in Dungarvan a decision was taken to set up a Project Team to organise a short trip to Washington in 2013 to commemorative the historic event of fifty years before. After many contacts, meetings, e mails and discussions; on the 23rd November, 2013 eleven retired officers (former cadets of the 37th Cadet Class) travelled to Washington to commemorate the sad events of 1963. We were accompanied by a colour party of five senior cadets drawn from the current 89th Cadet Class under Comdt Frank Flannery and a piper, Sgt Joe Meade. Eight of the retired officer’s wives also travelled. Prior to departure, the US Embassy held a short commemorative ceremony at the Embassy involving the 89th Class. An Tánaiste and the Chief of Staff attended this event.

On Monday the 25th November the party was received by the Old Guard in Fort Myer, Washington where we had been accommodated as Cadets on the same day and date in 1963. All were delighted to meet US Army Lieut. Martin Dockery (retd) who had been our Liaison Officer at the time and had flown down from New York for the occasion. After a display of Old Guard ceremonial drill, Lt Col Pete McMahon (retd) presented a replica of the 37th Class Pennant to the Officer Commanding the Old Guard.

The main ceremony took place at President Kennedy’s graveside at nearby Arlington Cemetery in the afternoon. This ceremony consisted of the national and cadet colours being marched on accompanied by the piper. The reading of a poem by W.B. Yeats “The Cloths of Heaven” was followed by the playing of a lament, “The Mist over the Mountains” (which was played at the funeral 50 years before) and the laying of a wreath by Lt Col Rod Dunne (retd) on behalf of the 37th Class and the Defence Forces. The piper brought the ceremony to a conclusion with the playing of “Amazing Grace”, a favourite of President Kennedy’s. The ceremony was conducted in the presence of the Irish Ambassador Anne Anderson and witnessed by many visitors to the graveside.

After a short tour of Arlington the party proceeded to the Tomb of the Unknowns where Capt Tom Hickey (retd) laid a wreath on behalf of the Defence Forces. This was a rare honour normally reserved for visiting heads of state and chiefs of staff. In 1963 the cadets had flown to Washington with their Lee Enfield No.4 .303 rifles under their seats. This time Col Eoin Moloney (retd), on behalf of the 37th Class, presented a deactivated Lee Enfield (which this time had travelled in the hold of the plane) to the Arlington Cemetery Authorities as a memento of the historic event, to be displayed in the Arlington Museum, next to the main entrance to the cemetery. Later that day Ambassador Anderson hosted a reception in the Irish Embassy at which Lt Col Joe Ahern (retd) presented a framed photograph of “Kennedy’s Cadets”, the 37th Class Guard of Honour at the graveside in 1963. The photograph will be hung in the Embassy.

The following day the party went to the Pentagon and were given a tour of the building which included visiting the impact site and memorial to the victims of the 9/11 plane crash. The group were then received for over an hour by General Martin Dempsey, Chairman of the Joint Chiefs of Staff. General Dempsey’s grandparents came from Mayo and Donegal respectively and Col Brian O’Reilly made a presentation to him of Tyrconnell single malt and a copy of the Chiefs of Staff Portrait Collection edited by Col Tom Hodson (retd) – another member of the 37th. Gen Dempsey gave each member of the party his dog tag ornamental medallion. In the afternoon the party visited Capitol Hill and were given a very interesting tour of that historic place.

As Wednesday was the eve of “Thanksgiving” no formal visits were undertaken and persons were free to visit many of the well known sites and museums of Washington. All were struck by the warmth of the reception in Washington 50 years after the original event and it was considered that the return visit was a huge success.

The group would like to thank all who supported them in this venture including the current and former Chiefs of Staff, the Department of Defence, the Department of Foreign Affairs, the Irish Embassy in Washington, the US Embassy and Military Attaché, McKee Officers’ Club, Mr. W. J. McCarter, Buncrana and ARCO.