On 15 September, Mr Paul Kehoe TD, Minister responsible for Defence launched a publication titled “The College” in Collins Barracks Dublin. The publication outlines the history of the Irish Military College, 1930 – 2000. Since its establishment in 1930, the Irish Military College has had a vital influence on not only the Defence Forces but on the nation. It has formed all of Ireland’s commissioned officers, many of whom have achieved distinction both within and outside of the Defence Forces. 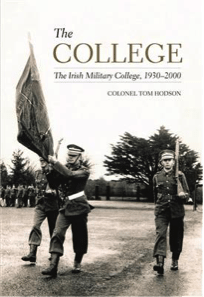 The story of this relatively unknown national institution is intriguing as it has attempted to fulfill the roles laid down for it in 1923 in training and instructing officers and officer candidates. In this book, Colonel Tom Hodson, a former instructor in the Military College and a graduate of École de Guerre, Paris, charts its history.

Colonel Hodson recounts, how from its early predecessor, the Army School of Instruction, the Military College has repeatedly re-invented itself, culminating in the requirement for today’s modern institution to embrace and impart instruction based on the needs of the Irish Defence Forces and the procedures of European and NATO armies.

During the launch of “The College”, Colonel Hodson paid tribute to Dr Michael Kennedy Royal Irish Academy for his advice, criticism, support and encouragement. He acknowledged the support received from the Defence Forces, National Archives, DFA Archives, Military Archives and the National Library. Col Hodson thanked Brigadier-General Jimmy Flynn DSM for access to the papers of his late father, former Adjutant-General, Colonel James Flynn which give great insight into the early days of the Military College. He also conveyed his appreciation of the invaluable help received from many quarters including serving and retired personnel of the Defence Forces, Ms Lavinia Greachen, Professor Anne Ryan and Dr Tony Walsh. His greatest acknowledgement was to his wife Hilda and their extended family.

Concluding his presentation, Colonel Hodson mentioned Francois Roth’s history of the 1870 Franco-Prussian War where the author referred to the École de Guerre: “the history of that institution is still not well enough known from within to form a definitive judgement”.

In his introduction to “The College” Colonel Hodson states: “This book is not written from within. It is, however, written by one who had the privilege of being for a while within, and while it may not form a definitive judgement it may, at least, record the story of an important national institution and bring it to the attention of a wider readership.

Speaking at the launch, the Minster stated, inter alia, “The Military College has a proud tradition of graduating highly professional commissioned officers that benefit the Defence Forces and a wider community. Colonel Hodson has produced a comprehensive history of the Military College, providing a valued source of reference for students of military history.”

In an academic assessment of the publication, during the launch, Dr Michael Kennedy, Royal Irish Academy, stated inter alia that “The College” has enriched the military history of Ireland.

Colonel Tom Hodson was a commissioned officer in the Irish Defence Forces. He served in a wide range of appointments both at home and abroad, including with the United Nations and with the European Union Military Staff. A distinguished graduate of the École Supérieure de Guerre, Paris, Colonel Hodson instructed in the Command and Staff School of the Irish Military College. On retirement, he entered Trinity College Dublin where he graduated with a BA(Mod) in the History of art and French, and a Mlitt on the French artist and soldier Georges Jeanniot. He has edited “Chiefs of Staff, The Portrait Collection of the Irish Defence Forces” (Dublin 2011).

Colonel Hodson’s commendable book “The College”, of 288 pages, complete with photographs and index, was first published by History Press Ireland in 2016, and is available in bookshops and on line.
ISBN 9781845888992