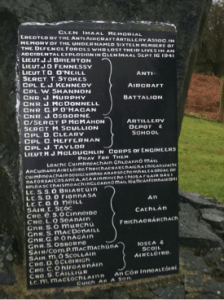 Representing the GOC, Colonel Jim Burns laid a wreath on behalf of the Defence Forces. The 2 Artillery Regiment provided the Honour Guard and fired a minute gun during the ceremony. Msgr John McDonald CF offered prayers. Musical honours were rendered by instrumentalists from the Army School of Music.

In June 1941, some of the Battalion’s personnel, garrisoned in Kildare Barracks (renamed Magee Barracks in 1952), were assigned to the newly established 12 pdr Battery. As with many units at the time, this Battery also trained in mines and explosives.

On 16 September 1941, fifteen personnel drawn from this Battery and the Depot and School Artillery Corps, (three Lieutenants, one Battery-Sergeant, two Sergeants, five Corporals and four Gunners), along with Lieutenant Michael McLoughlin, an Engineer Instructor, when a training mine exploded. May they Rest in Peace.

Lieutenant Michael J. McLoughlin is buried in the family grave in Kilbroney, Rostrevor, County Down.

In 1957, under the leadership of Captain Charles Brennan a committee was formed to commemorate those who died in the Glen accident. In 1958, three light stained glass windows were installed and dedicated in the Church of the Most Holy Rosary, McKee Barracks. Executed by Irish Stained Glass, the centre window depicts a crowned figure of the Patroness of the Defence Forces, Our Lady of the Rosary, looking down on Glen Imaal. On the base section can be seen a panoramic view of the Glen which extends into the two side windows depicting a soldier of the Artillery Corps and a soldier of the Corps of Engineers resting on arms reversed.

On the 40th anniversary, in 1986, the Minister for Environment Mr John Boland T.D. unveiled a Monument at Seskin Bridge, marking the site of the accident in order to honour and commemorate those who died in 1941. The Monument is a 14 ton monolith, donated by Cemetery Roadstone Ltd, with a polished granite plate bearing the names of the sixteen who died. The Minister’s uncle, Sergeant-Major Frank Whitty RIP, an instructor in the Artillery School, was injured in the accident. In 1987, sixteen individual stones were placed in a semi-circle around the monolith.

The 1941 training accident remains the single tragedy with the greatest casualties in the history of Óglaigh na Éireann. Gunner John Caffery, the last known survivor of the accident, and who was also involved in the evacuation of Dunkirk, died on 03 October 2011, aged 94.