Before the Great War, Ireland had already begun to take up arms. Conflict and political unrest was the norm. But when the Great War threatened to destroy the lives of countless ordinary citizens it was the men and women of Ulster and Ireland who braced against the storm. 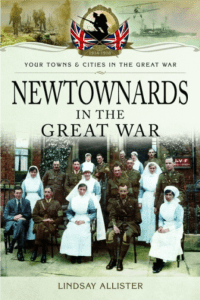 Amidst the chaos of international war, Newtownards was the eye in that storm. Newtownards in the Great War tells the stories of the men and women who volunteered, fought, laboured and sacrificed for the right to be free from persecution and to serve their country with pride.

From the inception of the UVF to the partition of Ireland, this book reveals the history of a remarkable town, and shares the secrets of the courageous men and women of the Great War; those who faced one of the greatest political upheavals of the twentieth century; those who overcame hardship; those who shaped the world.

About the author: Lindsay Allister, born in Belfast, was raised in Newtownards where she discovered the rich history of this County Down town. She studied at Movilla High School and remains an active member of the community. Lindsay has worked both locally and nationally with various newspapers, and is currently a freelance writer. She discovered her love of history when her father persuaded her to take part in the Brownies’ history badge project.