On Friday, 18th August 2017, a bronze memorial was unveiled on Frezenberg Ridge to commemorate the men of the 16th (Irish) and 36th (Ulster) Divisions who fought and died attacking German redoubts along the ridge.

Members and friends of the Royal Dublin Fusiliers, the Royal Munster Fusiliers, the Royal Inniskilling Fusiliers and Royal Irish Regiment (18th) Foot Associations attended the ceremony.
Regimental Standards from these associations were paraded under the command of Captain Seamus Greene (Retd) RDFA. Ms Ruth Barret represented the Irish Embassy in Brussels. Mr Andrew Elliott represented the Northern Ireland Executive in Brussels. The Somme Heritage Centre was represented by Mr Alan McFarland.
The people of Langemarck were represented by the Mayor of Langemarck Mr Alain Wyffels. Master of Ceremonies was the man behind the project in Flanders, Mr Erwin Ureel.
Speeches were delivered by Mr Alain Wyffels, Mr Tom Burke, Mr Alan McFarland and Ms Ruth Barrett. In his speech, Mr Tom Burke referred to the fact that the memorial plaque and stone was located at the divisional boundary of the two divisions on the day of the attack. He stated:

We on the island of Ireland know a fair bit about interfaces, boundaries and borders both mental and physical. The political, religious and cultural mental borders which bedevilled Ireland in 1917 are, in my opinion, sadly alive and well today in Ireland….

The historian Jay Winter has suggested that:

War memorials invite us to recall more than the central facts of loss of life and bereavement in the Great War. I would argue they invite the passer-by to think beyond the cold statistics of losses or sentimental inscriptions on memorials. They challenge us to think about the tragedy of conflict and maybe reflect on our own personal borders, our interfaces and how we have created them. What have I done to create this border and how can I work to build a bridge across it. If this memorial we unveil today stimulates the passer-by from the island of Ireland and beyond to ask themselves these questions, then I believe those brave Irish men whom we honour here today did not die in vain.

The flag used in the unveiling was specially commissioned by Erwin Ureel, and depicted the recruiting areas and depots of the Irish Infantry Regiments. The Scottish song writer and singer Mr Alan Brydon sang ‘Callin Doon the Line’.

Two pipers from Field Marshal Haig’s Pipes and Drums played during the ceremony. They played the march, ‘Brian Boru’ at the start; later for the lament they played, ‘The Flowers of the Forest’, followed by ‘Ich hatt’ einen Kameraden’, and finished off the ceremony by leading the Standards off with the rousing march ‘Killaloe’.

Wreaths were laid and a bugler from the Menin Gate Last Post Association played the Last Post and Reveille.

After the ceremony, a reception was graciously offered by Mr Alain Wyffels in the Town Hall Langemarck.

The wording on the memorial is as follows: 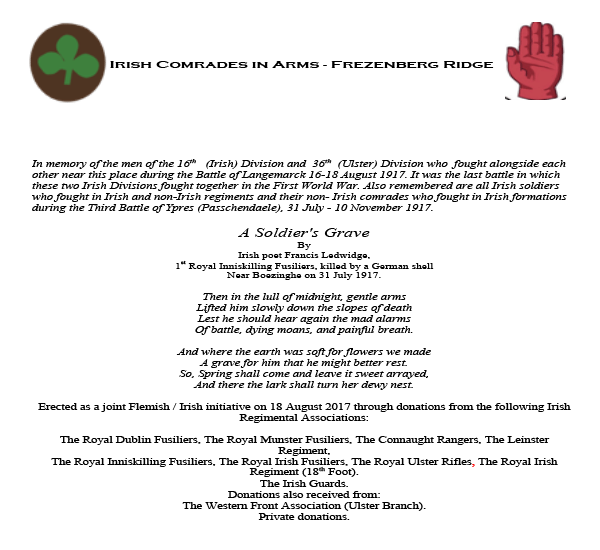 After the first and successful joint effort of the 16th (Irish) and the 36th (Ulster) Divisions at the Battle of Wijtschate – Messines Ridge (7 June 1917), the two Divisions were transferred from the 2nd Army to the 5th Army of the British Expeditionary Force (BEF).

Sadly, the euphoria of the shared success of Wijtschate was short lived. Only two months later, both Irish Divisions fought shoulder to shoulder for a second and last time at Frezenberg, a rural area on the western side of Zonnebeke.

Having been engaged in a series of patrols, raids, fatigue duties and coming under heavy German shelling in water-filled trenches, the 16th(Irish) and 36th(Ulster) Divisions suffered serious losses in the days before being assigned to attack German redoubts on Frezenberg Ridge on 16 August 1917.

The Irish troops, massively understrength and physically weak attacked the ridge and after one day of fighting on 16 August losses were so high that they had to be relieved by an English and a Scottish Division. The attack was a complete failure; most of the initial gains were lost.

Between 1 and 20 August 1917, the 16th (Irish) Division suffered a loss of 4,285 men. Among those lost was Captain Jim Shine, aged twenty-six of the 2nd Royal Dublin Fusiliers from Dungarvan, County Waterford. He was the third son Mrs Shine had lost in that war.

Losses to the 36th (Ulster) Division for the same period amounted to 3,585 men. Because of these severe losses, many of the Irish battalions within these Divisions were amalgamated or disbanded.
The 16th (Irish) Division soon left Flanders without ever returning; losing its Irish identity in Spring 1918.

The Ulstermen came back over a year later, participating in the successful final offensive at the end of September 1918, which started nearby.