Commemorative plaques in honour of Sergeant John (Jack) Moyney VC, Irish Guards, were unveiled in Rathdowney on 12 September. The event, organised jointly by The Irish Guards, the Royal British Legion and Laois County Council, marked the centenary of the events for which Sergeant Moyney won the Victoria Cross, during the Third Battle of Ypres (also known as the Battle of Passchendaele) in Belgium, during World War I. 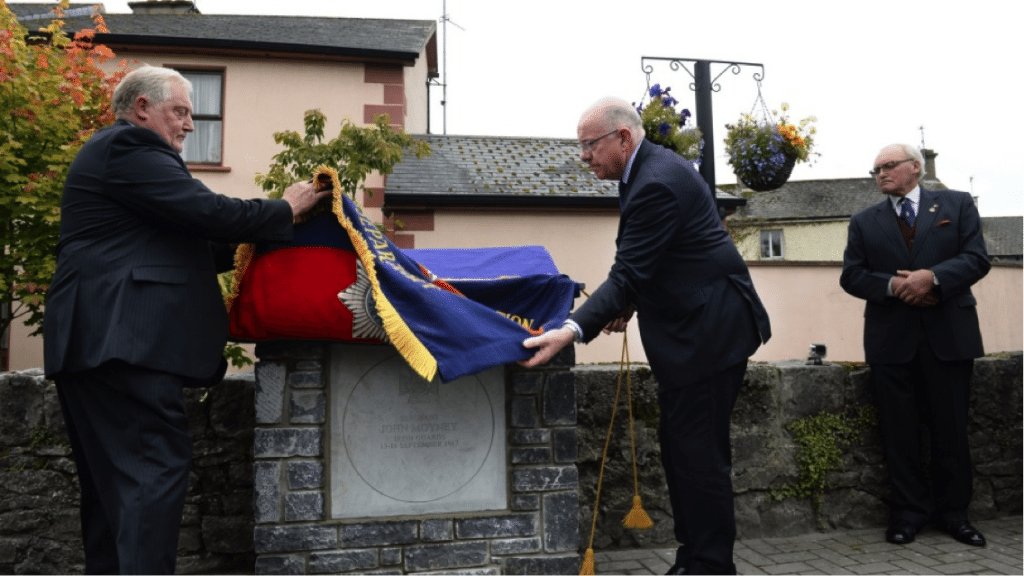 Mr Ian Robertson of the Irish Guards Association gave the welcome address. He was followed by a local historian Mrs Barbara Maher who advised that 10 of the 40 Rathdowney men who enlisted were killed in the First World War. Mr Kevin Myers recalled interviewing Jack Moyney at his home on Roscrea in the 1970s and described him as a modest man, who was nonetheless quietly proud of his contribution: “Sergeant Moyney was embarrassed by his Victoria Cross. He said, ‘I was an Irish Guards soldier, I did my duty”’. 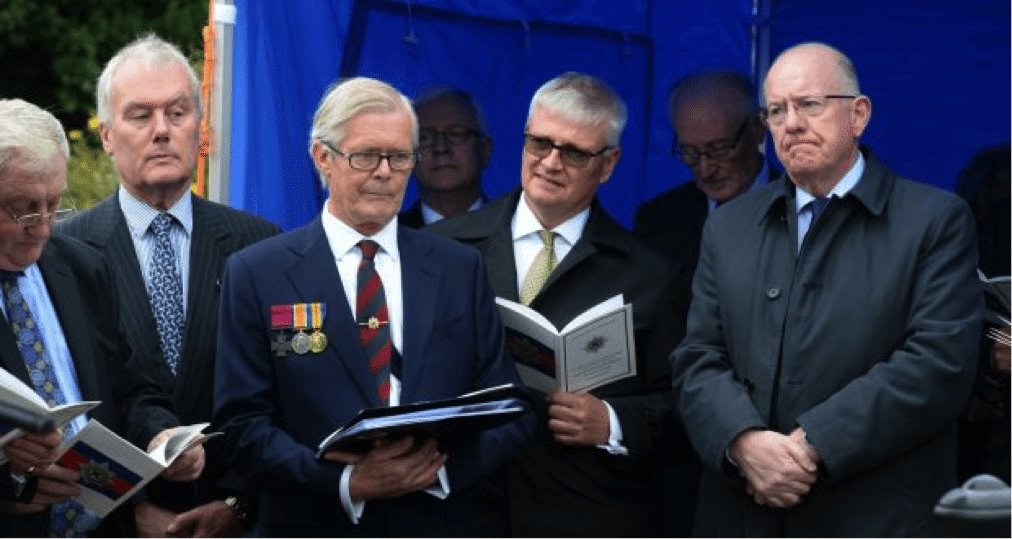 An ecumenical service of remembrance was concelebrated by Fr Martin Delaney Parish Priest of Rathdowney and Rev Richard Seymour-Whiteley of Rathdowney Union of Parishes.
Readings were delivered by Mr David Gibson-Brabazon, President of the Midland Counties and Kildare Branch of the Royal British Legion, and by Councillor Padraig Fleming, Cathaoirleach of Laois County Council.

The Minister for Justice and Equality Mr Charlie Flanagan T.D., and Councillor John King of Laois County Council unveiled the commemorative monument. The monument was made by local craftsmen under the guidance of Councillor John King, and comprises the Victoria Cross paving stone and a plaque describing the actions of Sergeant Jack Moyney VC and his later life.
Colonel Timothy Purdon (Retd) OBE, Regimental Adjutant of the Irish Guards delivered the Act of Remembrance which was followed by the Last Post, the Silence, Reveille, Piper’s Lament and the National Anthem.

Following the unveiling of the monument, Mr John Moyney, on behalf of the wider Moyney Family, spoke movingly of his memories of his grandfather.
Wreaths were laid by Minister Charlie Flanagan T.D., the British Ambassador to Ireland H.E. Robin Barnett, and representatives of the Royal British Legion and the Irish Guards. Floral tributes were laid by each of the five branches of the Moyney Family, by Cora Percival (Rathdowney), John Ryan (Roscrea), Emily Moyney (UK), Michael Maher (Kerry) and Catherine Grimes (UK). 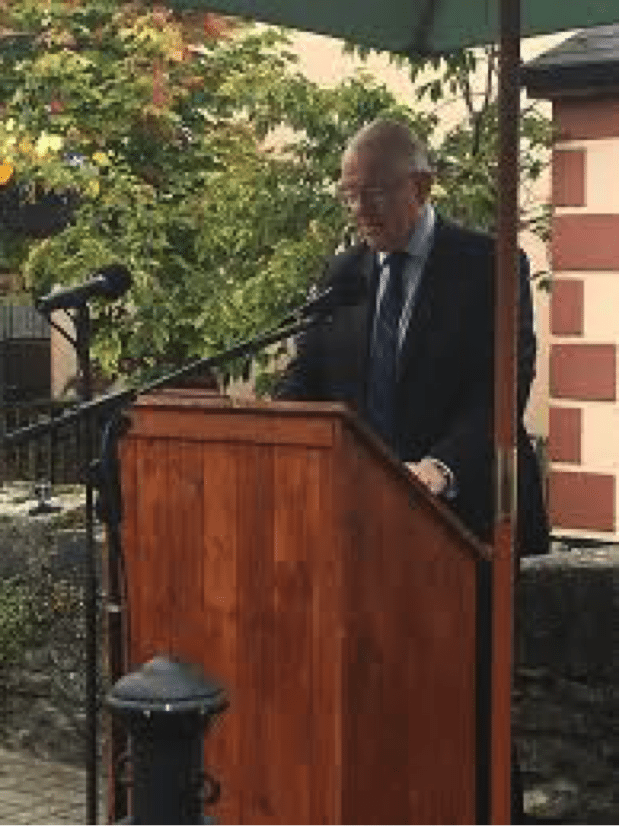 Shamefully as a State we lost our memory of Ireland’s involvement in the first World War once we achieved our independence. Events such as this in Rathdowney help us recover our memory of that period of history. I am proud that as a nation we are now embracing the past in a more inclusive and generous way. In so doing, we are merely facing up to reality.

For photographs of the event, please see the Military Heritage of Ireland Trust’s Flickr Album >> 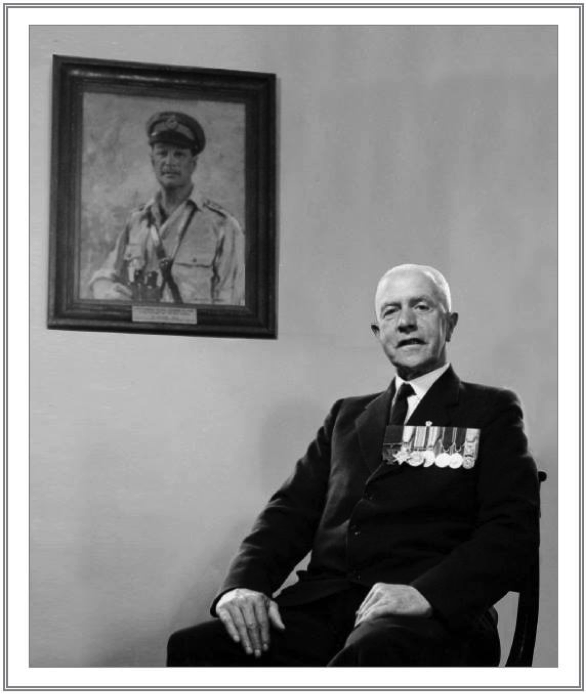 As a young man, Jack worked with local farmers in the area of Rathdowney. On 07 April 1915, he enlisted with the 2nd Battalion Irish Guards and departed for France on 05 October 1915 with No 5 Company. He was promoted to Lance Corporal on 20 December 1915, and Lance-Sergeant on 18 October 1916.

On 12/13 September 1917 at Ney Copse, Belgium, north of the Broembeek stream, Lance Sergeant Moyney commanded fifteen men forming two advanced posts. The Broembeek stream cut through the northern sector of the Ypres front, between Wijdendrift and the southern edge of Houthulst Forest. 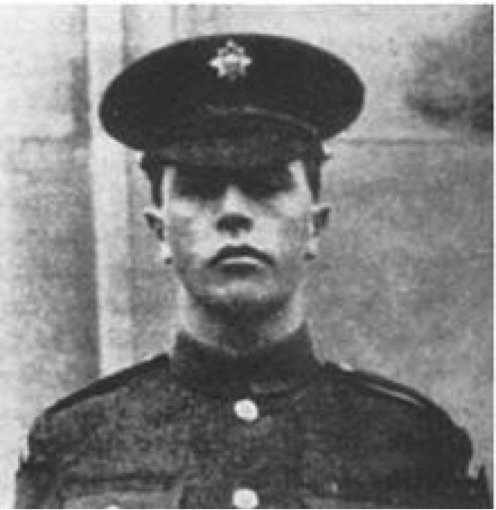 As a result of action on 12/13 September 1917, Lance-Sergeant John Moyney was recommended for the Victoria Cross – the highest military honour for bravery in the field. His citation was published in The London Gazette, on Wednesday 17th October 1917:

For most conspicuous bravery when in command of fifteen men forming two advanced posts. In spite of being surrounded by the enemy he held his post for ninety-six hours, having no water and little food. On the morning of the fifth day a large force of the enemy advanced to dislodge him. He ordered his men out of their shell holes, and taking the initiative, attacked the advancing enemy with bombs, while he used his Lewis gun with great effect from a flank. Finding himself surrounded by superior numbers, he led his men in a charge through the enemy, and reached a stream, which lay between the posts and the line. Here he instructed his party to cross at once while he and Pte. Woodcock remained to cover their retirement. When the whole of his force had gained the southwest bank unscathed he himself crossed under a shower of bombs. It was due to endurance, skill and devotion to duty shown by this non-commissioned officer that he was able to bring his entire force safely out of action’.

King George V presented the Victoria Cross to Sergeant Moyney. His medals, including his Victoria Cross, are held in the Irish Guard’s Regimental Headquarters in Wellington Barracks London. 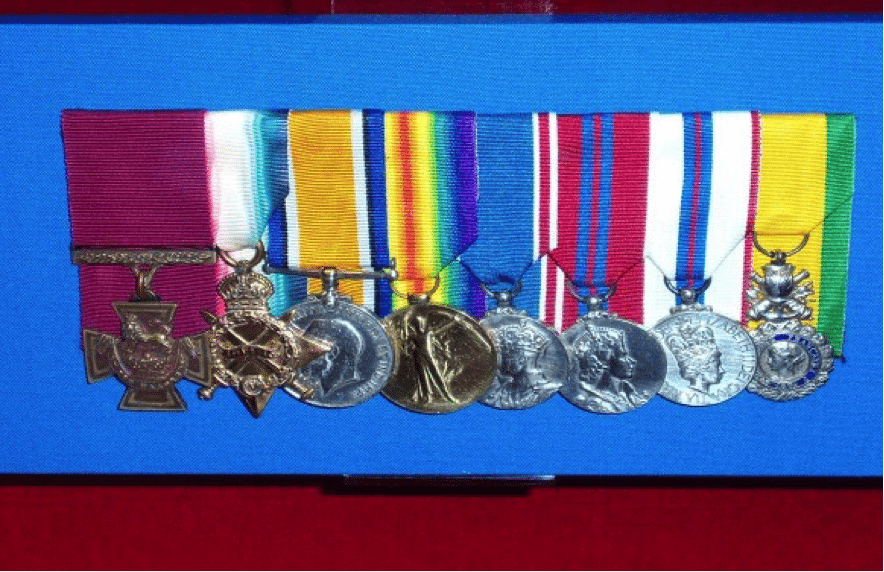 Following the end of the First World War, Sergeant Jack Moyney VC returned home and worked as Head Porter in Roscrea Railway Station for almost forty years. During the Second World War, his only son enlisted in the Irish Guards, saw service in North Africa and was taken prisoner in Italy. 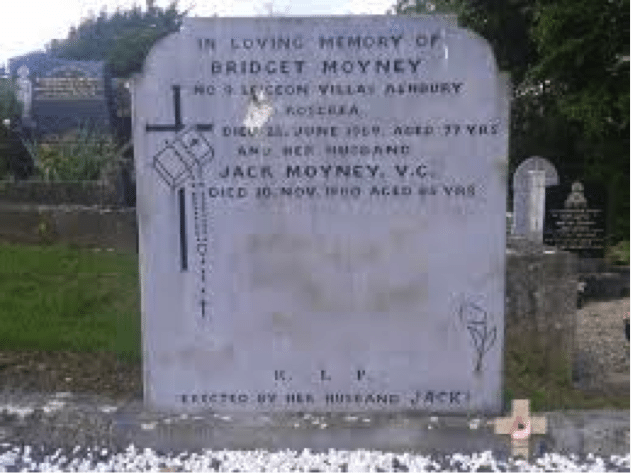 As part of the Decade of Centenaries, the Commonwealth War Graves Commission, with the support of the Irish Government, has commissioned paving stones for all 24 recipients of the Victoria Cross during the First World War who were born in the Republic of Ireland. The memorial programme associated with the Paving Stones envisages that a commemoration will take place on the anniversary of the historic action for which each VC was awarded. 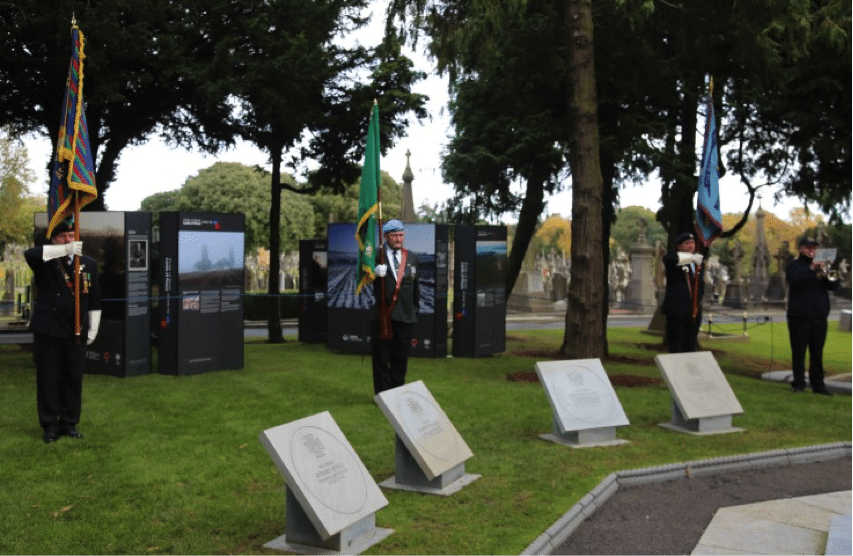 The 24 Paving Stones will eventually be part of a unified permanent display at the Cross of Sacrifice in Glasnevin Cemetery, and replica stones are available for local communities of the place of birth of the recipient, (costs accruing to the local community).

On 23 August 2014, the first paving stone was presented to Minster Humphreys TD, Minister for Arts, Heritage and the Gaeltacht by Lord Ahmad of Wimbledon, Parliamentary Under-secretary of State for Communities and Local Government, in Glasnevin Cemetery on the 100th Anniversary of the death of Lieutenant Maurice Dease, 4th Battalion, Royal Fusiliers, of Coole County Westmeath. Manning a machine gun, Lieutenant Dease was killed in action during action in Mons. Lt Dease’s Paving Stone remains on display in the Prospect Gallery at Glasnevin as part of the First World War Exhibition.

A paving stone honouring Sergeant John Moyney VC will be unveiled at the Cross of Sacrifice on 11 November, 2017 in Glasnevin Cemetery.