The official State commemoration of the centenary of the death of Thomas Ashe took place on 22 September, in Glasnevin Cemetery. 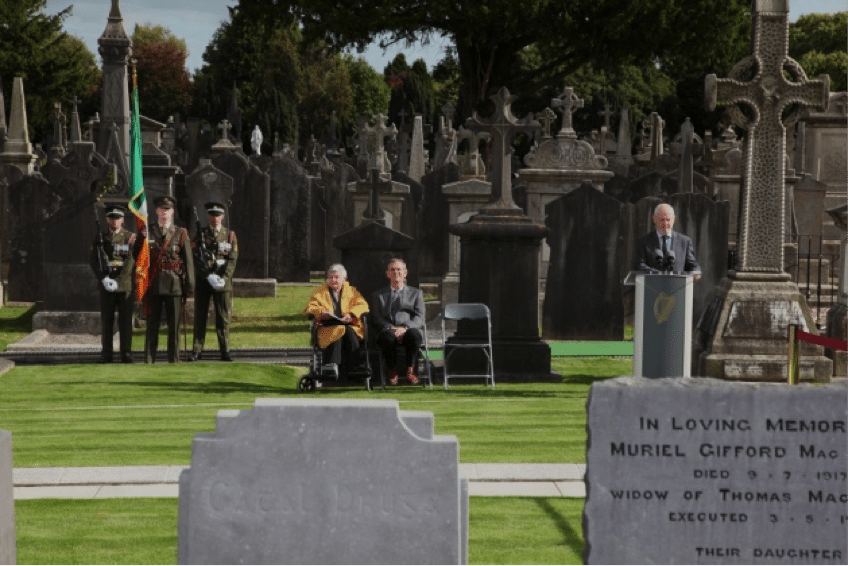 The commemoration contained a significant cultural element to reflect the life and legacy of Thomas Ashe. He was a native Irish speaker, a talented piper and founding member of the Black Raven Pipe Band, as well as a keen sportsman who was active within the GAA and particularly involved with the Round Towers Lusk GAA Club. The ceremony included musical performances from Comhaltas Ceoltóirí Éireann and a piper from the Black Raven Pipe Band. 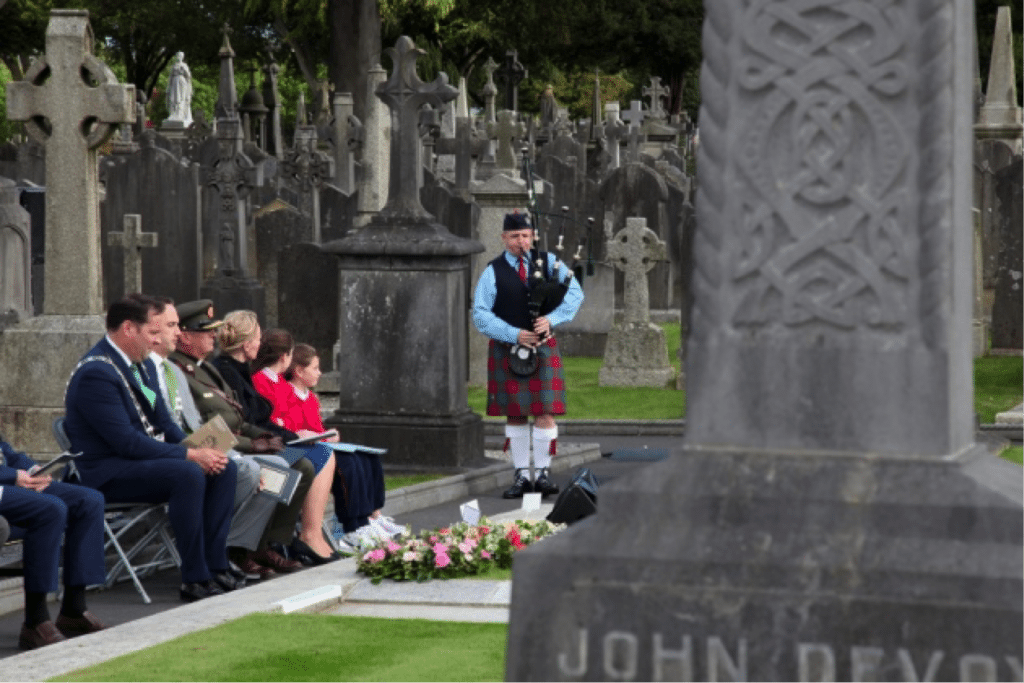 Thomas Ashe was also remembered as a talented and dedicated teacher, who spent eight years at Corduff National School in Lusk. Two pupils from that school shared their reflections on Ashe’s exceptional legacy as a teacher.

The ceremony culminated with the formal State commemoration with participation by members of the Defence Forces. Minister Heather Humphreys TD laid a wreath on behalf of the Irish Government.

Wreaths were also laid by the Lord Mayor of Dublin, the Cathaoirleach of Meath County Council, the Deputy Mayor of Fingal and the Leas Cathaoirleach of Kerry County Council on behalf of the people of, respectively, Dublin, Kerry and Meath, where Thomas Ashe’s legacy is particularly felt. Wreaths were also laid on behalf of the family of Thomas Ashe and also by the chairman of Glasnevin Trust. 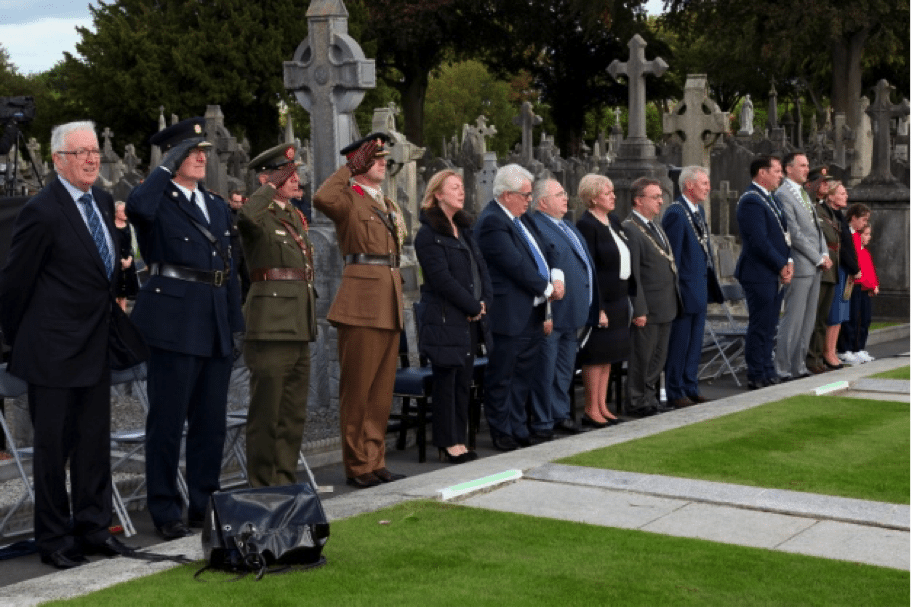 The wreath-laying ceremony was followed by a minute of silent reflection and a lament played by a Defence Forces piper.

Originally from Kerry and a teacher by profession, Thomas Ashe was a prominent activist in most of the major nationalist organisations of the pre-independence period, including the Gaelic League, the Gaelic Athletic Association, the Irish Republican Brotherhood, and the Irish Volunteers. He was responsible for leading the Irish Volunteers at the battle of Ashbourne in Co. Meath, the most significant military engagement outside Dublin during the Easter Rising. 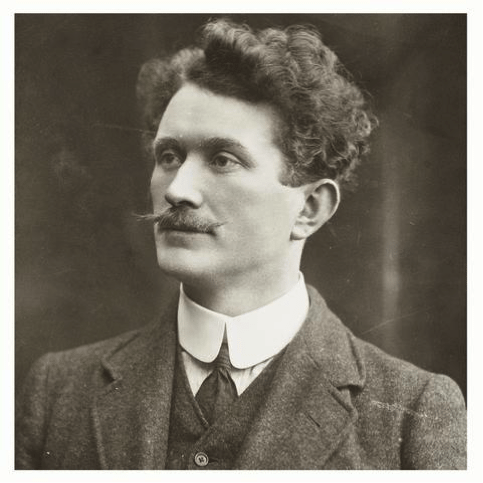 Held in high regards by his peers, he was imprisoned after the Rising but was released, and became a key figure in the reorganisation of separatist republicanism in 1917. Imprisoned for making a seditious speech, in August 1917, he and a number of other republican prisoners went on hunger strike in Mountjoy gaol, and died on 25 September 1917 as a result of force-feeding by the prison authorities.

His subsequent funeral and burial in Glasnevin Cemetery, was characterised by the largest show of strength by the republican movement since the Rising, and was a major milestone in the campaign for independence.

Speaking in advance of the States commemoration, Minister Humphreys said that

‘Thomas Ashe was a member of that revolutionary generation that laid the foundations of the modern Irish State. The State, together with members of the family of Thomas Ashe, will mark his life and legacy with a sensitive and fitting commemoration that reflects his great love of his country and his heritage. In this Decade of Centenaries, my consistent priority is to promote commemorations that are respectful and inclusive. I thank Glasnevin Trust for their continued partnership over the years and for their assistance in organising this event’.

‘As we reflect on the short life of Thomas Ashe, it is extraordinary how much he achieved. From the Gaelic league to the Gaelic fields; from his school to his community; from the Irish Volunteers to the IRB; he was a leader. His tragic death sometimes overshadows his many talents and achievements’. 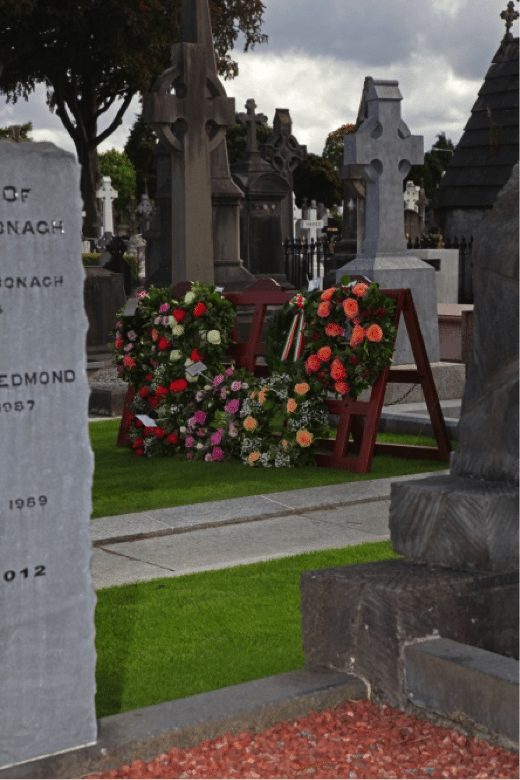