Throughout Ireland, Remembrance Ceremonies were held commemorating those who died in the First World War. Ceremonies were also conducted at the Cenotaph in London.
Northern Ireland – Enniskillen.

Following in the footsteps of his predecessor Mr Enda Kenny TD, who took part in every ceremony since 2012, An Taoiseach Mr Leo Varadkar TD joined the Northern Ireland Secretary James Brokenshire, and the Northern Ireland First Minister Arlene Foster MLA at a wreath-laying ceremony to commemorate the Irish war dead at the Remembrance Day Service in Enniskillen, on Sunday, 12 November. 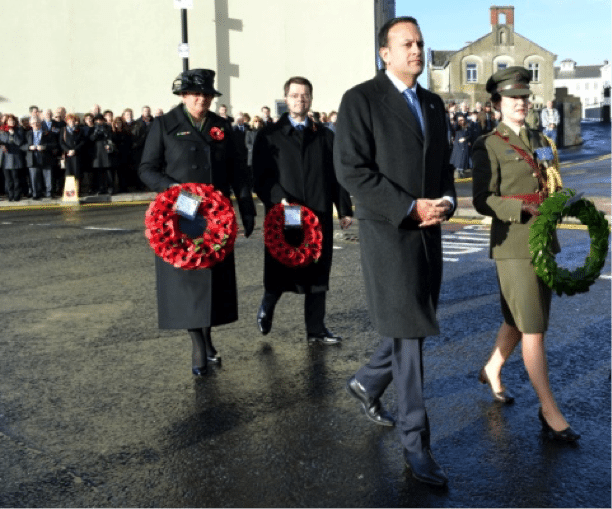 Mr Varadkar laid a wreath of green laurels alongside the many red poppies at the County Fermanagh town’s war memorial. A Remembrance Service followed in St Macartin’s Cathedral.  The Remembrance Day ceremonies in Enniskillen had an added significance, as they marked the 30th anniversary of the IRA bomb attack which claimed the lives of 12 people and injured more than 60 others in November 1987.

View Our Flickr Gallery of Images from this Event >>

Also on 12 November, the Minister for Culture, Heritage and the Gaeltacht, Heather Humphreys, TD, attended a Remembrance Sunday ceremony at the Cenotaph in Belfast, where she will lay a laurel wreath, to remember those who died in the First World War.

Attendance included the British Minister for Defence, People and Veterans, Mr Tobias Ellwood MP, as well as the Lord Mayor of Belfast Nuala McAllister. Speaking in advance of the ceremony, the Minister said she was honoured to commemorate all of those who died during World War I.

“This weekend we will remember in a special way the men and women from across the island of Ireland, who served and gave their lives during World War I.
“Although inspired by different motivations, they all shared the harsh uncertainties of war and the trauma of the battlefield as well as the enduring hope of a safe return to their loved ones. We remember too their families and the grief and hardship that they endured.” 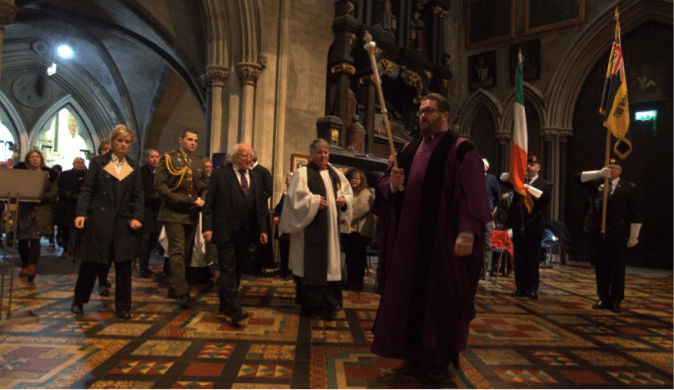 The service was organised by the Royal British Legion Republic of Ireland. During the service, President Higgins and the Earl of Meath laid wreaths at the War Memorial in the north transept. The service was led by the Dean, the Very Revd William Morton and sung by the Cathedral Choir (Boys’ and Mens’ Voices). Lessons were read by the Minister for Justice and Equality, Charlie Flanagan TD and An Ceann Comhairle, Seán Ó Fearghaíl TD. The exhortation was led by Lieutenant-Colonel Ken Martin (Retd), and was followed by the Last Post, the Reveille and the Kohima Epitaph.
The sermon was preached by the cathedral’s Precentor, Canon Peter Campion, who spoke of the need to respect people’s decisions on whether to wear the poppy or not. Canon Campion said he chose to wear a poppy each year in remembrance of his grandfather and grand–uncles who fought in World War I and to remember the 50,000 Irish and others who died. “I don’t expect people to admire me for wearing the poppy, but I hope they will respect my choice,” he stated.

The Minister for Justice and Equality, Charlie Flanagan TD, represented the Irish Government. Attendance also included the Ceann Comhairle Sean Ó Fearghail TD, the ambassadors of the United Kingdom, the United States of America and France, representatives of the Defence Forces, Veteran Associations and Regimental Associations.

Speaking ahead of the ceremony, the Minister for Justice and Equality, Charlie Flanagan TD said:
“It is always an honour to participate in events such as this one, where we reflect on the sad events of a hundred years ago when men and women from all parts of this island and from all traditions, left their homes to fight in the First World War. It shows the mutual respect for all traditions and helps further reconciliation on the island of Ireland and across these islands.

As Minister for Foreign Affairs and Trade, I was privileged on several occasions to attend the Remembrance Sunday ceremony at the Cenotaph in Belfast, where I laid wreaths. It was also my privilege earlier this year to attend the 100th Anniversary commemoration of the Battle of Messines Ridge in Flanders, where regiments from North and South fought and died together, side by side.

Only this week, the historian Tom Burnell estimated that over 30,000 men from the 26 counties died in the First World War, with a further 17,000 from the North believed to have perished between 1914-1918. For too long in this country, we neglected this part of our history, and it is important that we acknowledge the huge event that this loss of life was on this island, even as the turmoil of the Rising and the War of Independence took place almost simultaneously.

It is said that those who do not learn from history are condemned to repeat it, and it is to be hoped that the relationships and links between all of the people of this island are now at the point where we mark, commemorate and celebrate all traditions with equality and fraternity. They fought and suffered together at places like the Somme, Messines and Gallipoli, and their sacrifice deserves to be remembered and marked with honour and respect.”

Photographs of the service in St Patrick’s Cathedral courtesy of Patrick Hugh Lynch.

View our Flickr Gallery of Images of this Event >>