Now, after several years of research and planning, the Curragh has its own Museum, that you can visit and take in the marvels of this magnificent geographical and historical site. we took in all aspects of the Curragh – military, civilian, equitation, conservation and archaeology. The museum is sub-divided into three parts. The environment encompassing archaeology, flora and fauna; the British military presence up to 1922 and finally the Defence Forces.

Over the years the military has become part of the Curragh, and the Curragh part of us. Right under our feet is history dating back to prehistoric times; the Fianna used to meet at the Hill of Allen; Henry II camped here on his way to Dublin in 1171; the Jacobite army trained here in 1686-7.

This Museum is dedicated to all military personnel and civilians who have served in any capacity on the Curragh and it is hoped that visitors to the Museum will gain a better understanding of the cultural and natural heritage of this unique site.

The British on the Curragh

The British after establishing a permanent post in 1855, trained men to go and fight in the Boer War and the trenches of the Somme during World War I.  The Museum captures the story of the British presence on the Curragh from the 1800s to 1922. It documents the visit of Queen Victoria in 1861 when she visited her son Edward.

The Defence Forces from 1922 to the Present Day

On Tuesday, May 16th 1922 the Curragh Camp was formally handed over to the Irish National Army. Using original artefacts, letters, photos and audio visual displays, the museum highlights the generations of military personnel and their families that have passed through the Curragh Camp.

Sir Alfred Chester Beatty presented a unique collection of weapons to the Defence Forces in 1952.

The collection includes some rare examples of oriental matchlock guns and swords.

A range of Weapons from this period is on display including a Cavalry Sabre as used by the Monasterevan Yeoman Cavalry and a Brown Bess Musket with which the Dublin Militia was armed at the Gibbet Rath.

The Mid to late 19th Century

This period covers the establishment of the permanent camp and the Crimean War. The weapons on display chart the development of the rifle from the muzzle-loaded Enfield through the breech-loaded Snider-Enfield up to the Martini-Henry Rifle used in the Zulu Wars.

The Period from the Boer War to Irish Independence 1922

Artefacts from this period include a Mauser Rifle used by the Boers, a Thompson Sub-Machine Gun used in the Irish War of Independence, British Lee-Enfield and German Mauser Rifles from the 1st World War.

A number of exhibits concentrate on individuals who were involved in the momentous events of this period. Frank Kelly served with the Dublin Fusilers and was killed at the Battle of the Somme. Joe Lawless was interned in the Curragh Camp during the War of Independence. Denis Barry was a Republican Prisoner who died on hunger strike during the Civil War. A panel also commemorates the seven Republican Prisoners executed in the Curragh during the Civil War.

The Sliabh na mBhan, Rolls Royce armoured car formed part of the General Michael Collins convoy which was ambushed on the 22nd of August 1922 in at Béal na mBláth. 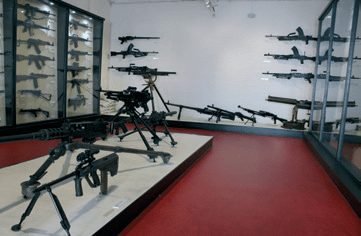 The collection includes weapons used by the Defence Forces from 1922 onwards.

It also includes weapons used by the Irish Volunteers in 1916 and during the War of Independence.

A unique collection of Ulster Volunteer Weapons dating from the 1914 period are also on display. 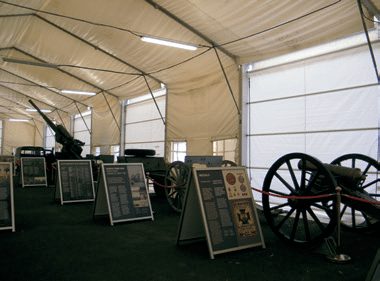 The Irish formed a large proportion of the British Armed Forces during the 1845 to 1922 period.

Items on display include Sikh cannon presented to Lord Gough, a 24 pounder Russian cannon from the Crimean War, World War 1 Artillery, and a range of armoured vehicles and artillery utilised by the Defence Forces during the Emergency period.

Before visitors view the exhibits, they can watch an audio visual presentation that has some magnificent aerial shots of the plains including the ring fort at Dun Ailinne, which at one time was part of the Curragh.

Some of the photographs from 1922 and just before the hand over to the Free State Army are fascinating. Then, there were 6,000 British Army troops and 4,000 civilians occupying or working in the camp. There were shops, cinemas, a swimming pool, schools and barbers, which all turned the Curragh into a thriving community. Back then standard accommodation was wooden billets, though none of these survive anymore, though the photographs indicate an interesting feature.

Opening times for the Curragh Museum