Between the 31 July and 10 November 1917, an estimated 320,000 allied and between 260,000 and 400,000 German casualties resulted from heavy fighting for a movement of the front line of only 8 kilometres in the West Flanders region of Belgium. On 30 and 31 July, the UK Government, in partnership with the Commonwealth War Graves Commission, the city of Ypres, the Municipality of Zonnebeke and the Memorial Museum Passchendaele 1917, formally marked the centenary of Passchendaele, the Third Battle of Ypres. 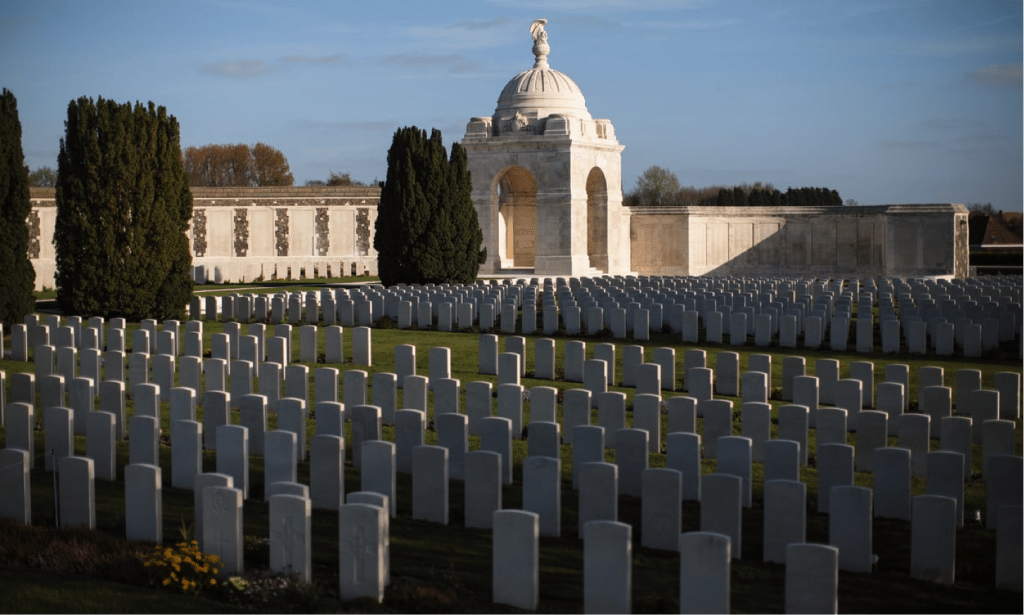 The official commemoration began on the eve of 30 July with the traditional Last Post Ceremony at the Menin Gate in Ypers, followed by a special live performance in Ypres Market Square. This particular Last Post was the 30,752nd time it was rendered since 1928.

After wreaths were laid at the Gate, the National Youth Choir of Scotland performed the song, O Valiant Hearts, which was adapted from a poem by John Stanhope Arkwright and has become known as the Ypres Hymn. As they sang, 54,391 poppy petals cascaded from the top of the Menin Gate – one for each name inscribed within its Portland stone arches.

On 31 July, a Service of Commemoration took place at the Commonwealth War Graves Commission’s Tyne Cot cemetery. The cemetery is the largest Commonwealth burial ground in the world with 11,971 servicemen buried or remembered there, 8,373 of them identified.

The Prince of Wales, accompanied by The Duke and Duchess of Cambridge and the King and Queen of the Belgians attended the commemorations. The British Prime Minister Theresa May, the German Foreign Minister Sigmar Gabriel, dignitaries from the combatant nations and relatives of those who fought in the Battle of Passchendaele were in attendance.

Wreaths were laid at the site of 11,000 graves of Commonwealth soldiers. Military honours were rendered by the Irish Guards, the Royal Marines and the Royal Irish Regiment. The Belgium Air Force conducted a Fly-past. During the service, military personnel and descendants read out letters and diaries from soldiers who fought at Passchendaele.

Later on 31 July, the Prince of Wales and The King and Queen of the Belgians, officially opened the Zonnebeke Church Dugout, a preserved First World War dugout which forms part of the Memorial Museum Passchendaele 1917.

A majority of the 11,961 servicemen buried in Tyne Cot cemetery died in Field Marshal Sir Douglas Haig’s 100-day offensive, devised by the commander of the imperial forces on the western front to force the Germans off the high ground, as he sought to drive through to the Belgian coast.

Tyne Cot was the location for a nest of machine gun posts just below Passchendaele, to the east, but standing above the Belgian town of Ypres, visible a few miles to the west, from where the British came. It was taken, lost, and taken again, costing the lives of thousands of men. The area was given the name Tyne Cot by the Northumberland Fusiliers who said the pill-boxes on which the machine guns were fixed looked from afar like their cottages back home in Tyneside.Standing at the foot of the Cross of Sacrifice memorial in the centre of the cemetery, built on one of the former machine gun positions, Prince Charles echoed the thoughts of his great grandfather, King George V, on seeing after the war the packed lines of graves at the most populous of the Commonwealth war cemeteries anywhere in the world.

Thinking of these men, my great grandfather remarked: ‘I have many times asked myself whether there can be more potent advocates of peace upon earth through the years to come, than this massed multitude of silent witnesses to the desolation.