Building on the vast reservoir of military history publications, the Trust assists the publication of research that supports its core focus on military heritage. In this context, the Trust has commissioned, supported and launched publications. The Trust also supports the disseminating the results of research and associated publications to educate the wider public through positive engagement with the media and appropriate associations. The Trust acknowledges the valuable contribution that the Military History Society of Ireland’s publication “The Irish Sword” makes to our understanding of Ireland’s military heritage.

Digging Up The Raj – Unearthing the Links with Deansgrange 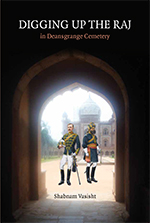 Digging Up the Raj broadens and deepens our understanding of the important role played by Irish soldiers and civil servants, and their respective families, in the 19 th and 20 th centuries in British Colonial India. Digging Up the Raj will provide historians, researchers, students, and families, with ample scope to examine the operational environment during the period of the Raj. A period which involved brave and committed military and civilian personnel, especially those of have a direct link to Deansgrange, and to Ireland.

Published by Hardprint, Digging Up the Raj was co-funded by Dún Laoghaire-Rathdown County Council

Whereas Shabnam Vasisht was born and brought up in India, she has lived in Ireland for over thirty years. Inspired by her mother Anu’s vivid memories of India, Shabnam decided to write Anu’s biography. Born in 1920 during the British Raj, at the age of 74, Anu emigrated from India to Ireland. Taking advantage of natural breaks in her mother’s life, Shabnam divided the story into distinct parts, resulting in the publication of 5 revealing books, including:  Anu: The Raj Years (December 2009), Anu: The Tug of War Years (August 2016), and Anu: The Celtic Years (January 2018). An author, artist and historian, Shabnam is an active member of the Dún Laoghaire–Rathdown Council’s Artists Network, and is a professional member of Visual Artists Ireland.

Brigadier-General Paul Pakenham (Retd), who launched Shabnam’s book, stated: The Military Heritage of Ireland Trust salutes Shabnam’s substantial achievement as a researcher, as an author, and, in particular, as a historian. Digging Up The Raj provides a valuable insight into the human experiences associated with the art and science of the profession of arms. Spanning 200 years, the book is a gem of knowledge and clarification, which is easily read, supported with inspiring illustrations and photographs throughout its 216 pages. It is a scholarly achievement.

A Guide to Irish Military Heritage 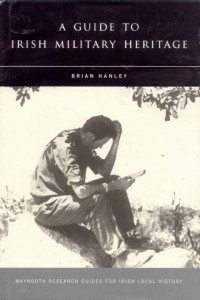 Commissioned by The Military Heritage of Ireland Trust, “A Guide to Irish Military Heritage” (Four Courts Press) was edited by Brian Hanley, published in 2004 and launched by Mr John O’Donoghue, T.D, Minister for Arts, Sports and Tourism. The development of the book was supported by the Ireland Fund. The guide is designed to assist those doing research into aspects of Irish military history. The primary aim of the guide is to provide detailed, practical guidance regarding the location and consultation of a wide range of documentary, oral and material sources, held in a variety of repositories throughout Ireland and, to a lesser extent, Britain. The guide lists the institutions, archives, public bodies and organisations that hold information relevant to military heritage, and provides contact details. In addition, museums, fortifications, battle sites and places in Ireland relevant to military affairs are included in the guide. The guide has a comprehensive bibliography of Irish military heritage and a guide to Irish military sources on the internet. The Military Heritage of Ireland Trust used the guide as the basis for developing the research section contained in its website of the Military Heritage of Ireland.

Brian Hanley is Government of Ireland Research Fellow at NUI Maynooth. He is the author of the critically acclaimed “The IRA, 1926-1936” (Four Courts press, 2002).

A Guide to Irish Military Heritage is Volume 7 of the Maynooth Research Guides for Irish Local History. These volumes are designed to provide historians, and specifically those who are interested in local history, with practical advice allowing them to conduct independent research in a competent and thorough manner. 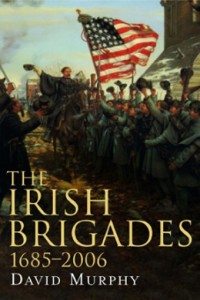 Commissioned by The Military Heritage of Ireland Trust, “The Irish Brigades 1685 – 2006 ” (Four Courts Press) was written by David Murphy and published in 2007. Since the 17th century, Irish soldiers have served in various armies across the world and have achieved a formidable reputation as fighting men. This book represents an attempt to recognize the varied and distinguished service of Irish soldiers. A gazetteer of Irish military service, including illustrations and maps, this book provides comprehensive details of Irish military formations raised from 1685 to the present day. An extremely useful reference work, this book celebrates the wide range and diversity of Irish military service from the Wild Geese regiments in the service of France and Spain, through the Irish Regiments in World War 1, to United Nations Missions undertaken by the Irish Defence Forces. The regimental histories outlined in the book represent a summarised account of Irish military heritage which hopefully will lead to further research on this important aspect of Irish history.

Dr David Murphy is a lecturer in military history in the History Department of NUI Maynooth. He was a major contributor to the Royal Irish Academy’s Dictionary of Irish Biography and is the author of Ireland and the Crimean War (2002).

“May I congratulate the Members of the Military Heritage of Ireland Trust for their initiative and vision in commissioning this publication and may I again pay tribute to Dr David Murphy for providing this comprehensive guide. It will be a most valuable asset for researchers, historians and general readers alike.” – Extract from speech by the Minister of Defence, Mr. Willie O’Dea, T.D. at the launch.

‘This book is in effect a military history of the Irish from the seventeenth to the twenty-first centuries …. This is a sweeping history that covers every continent on which wars were fought and countries as far afield as Argentina, America, Italy and South Africa, in fact anywhere that had an Irish unit fighting …. It is well illustrated with photographs, maps and charts, and a worthy addition to the recent books on Irish military history,” –  Books Ireland.

“The range of the book and the level of detail are remarkable … A most welcome addition to Irish military history”, – D.O’C, Irish Sword.

“Many will have anticipated eagerly a work such as this and the book must be welcomed.”  – Richard Doherty, Warbooksoutnow.

“In this book, David Murphy details the location of organised Irish military formations, their organisation, deployment, commanding officers, colours, mascots, mottoes – and nicknames, across four centuries and in most corners of the world. David Murphy’s work … commissioned by the Military Heritage of Ireland Trust [is an] essential addition to the book shelves of anyone interested in military history” – Ireland of the Welcomes.

Edited by Professor Gerald Dawe of Trinity College, Dublin, this publication was supported by the Military Heritage of Ireland Trust CLG, and was launched on the 11th November 2008 in Collins Barracks, Dublin by Mr Cathal Goan, Director General of RTÉ. It puts together in one volume, for the first time, experiences of the first and second world wars, as well as conflict in Ireland – the Easter Rising, War of Independence, the Irish Civil War – and the Spanish Civil War, in addition to various contemporary reflections on these events.
Reviews:
“What Gerald Dawe has done so movingly in this book is to bring together without any partisan judgement the poems written on all sides by Irish writers in the five – or more – wars in the thirty years of its coverage. It is an important book, full of despair, but also of a humanity that might mollify it” – Bernard O’Donoghue
‘These poems are as much about our inheritance of war-memory as anything else, moving reminders of the delicate webs which draw us together with all the cheated dead.’ – Clair Wills, Professor of Irish literature at Queen Mary, University of London, writing in the Irish Times. 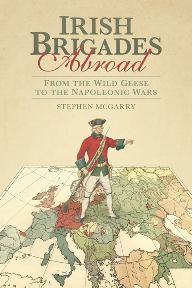 Launched by The Military Heritage of Ireland Trust, “Irish Brigades Abroad ” (The History Press Ireland) was written by Stephen McGarry and published in 2013. The book examines the complete history of the Irish Regiments in France, Spain, Austria and beyond. Covering the period from King James II’s reign of the three kingdoms of England, Scotland and Ireland, until the disbandment of the Irish Brigades in France and Spain, the book examines the origins, formation, recruitment and the exploits of the Irish Regimen. What emerges is a picture of the old-fashioned virtues of honour, chivalry, integrity and loyalty, of adventure and sacrifice in the name of a greater cause.

Stephen McGarry’s interest in the Irish Brigades stems from his time in Belgium. Living in Leuven for eight years, he was deeply moved with the City’s commemoration of the 250th Anniversary of the Battle of Fortenoy. Over a period of five years, Stephen researched in the region of 500 publications, including the publication recently available on microfiche titled “The Book on Trophies won by Louis XIV of France”.

“Resulting from extensive research, “The Irish Brigades Abroad”, provides a valuable insight into the human experiences associated with the art and science of the profession of arms” – Brig Gen Paul Pakenham (Retired) launching the book.