On Saturday 24 May 2017, an official state ceremony to commemorate the centenary of the death of the poet, Irish Volunteer and soldier, Lance Corporal Francis Ledwidge (1887-1917), took place in Janeville, Slane, Co. Meath. 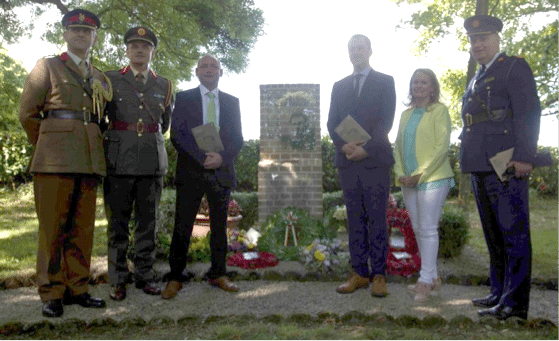 Born on 19 August, 1887, the eight of nine children, Francis (Frank) Ledwidge was the son of a farm labourer. Francis Ledwidge lived through some of the most momentous and transformative events that shaped the history of Ireland and today’s world. The period from 1912 to his death in 1917, brought about immense social and political change. It was a time of unprecedented violence, death and destruction. 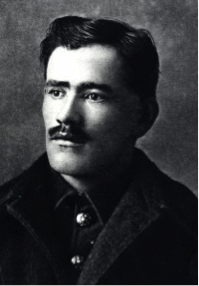 A keen nationalist, Francis Ledwidge was Secretary of the Meath Labour Union and joined the Irish Volunteers. The 1916 Easter Rising and the subsequent execution of its leaders, including his friend and fellow poet Thomas MacDonagh, were intensely painful for him. In response to those events, he wrote the haunting lament “Thomas MacDonagh”

After the outbreak of the First World War, on 24 October 1914, Francis Ledwidge enlisted in Lord Dunsany’s Regiment, joining the 5 Battalion, Royal Inniskilling Fusiliers, and saw service with the 10th (Irish) Division in Sulva Bay and in Macedonia. He injured his back in the retreat to Salonika and was invalidated home. Francis Ledwidge rejoined his unit and, in December 1916, was deployed to the Western Front.
Serving with the 1st Battalion, Royal Inniskilling Fusiliers, Lance Corporal Ledwidge was one of six killed by an artillery shell, while repairing the road to Pilkem, in the vicinity of Boezinge, northwest of Ypres, during the Battle of Passchendaele on the Western Front, on 31 July 1917.

The men were buried were they fell at Carrefour de Rose (Rose Crossroads), and subsequently reinterred in nearby Artillery Wood Military Cemetery. Lance Corporal Francis Edward Ledwidge is buried in Plot 2, Row B, Grave 5.

The centenary commemoration was arranged in partnership with Meath County Council and the Francis Ledwidge Museum Committee. It consisted of a cultural element, incorporating poetry, music and readings.  The event culminated in the formal State commemoration and wreath-laying ceremony, with participation by personnel of the Defence Forces.

Speaking in advance of the event the Minister for Arts, Heritage, Regional, Rural and Gaeltacht Affairs, Heather Humphreys TD said inter alia: “Ledwidge was a poet and a patriot, and it is fitting that he is being remembered in this special commemorative ceremony in the cottage where he was born in Slane. Many of us will remember reading the poetry of Ledwidge as children; he wrote beautifully about the landscape of County Meath and the vivid sights and sounds of the Boyne Valley, which inspired him”.

The event was attended by members of the Ledwidge family, with the poet’s nephew Joe Ledwidge (87) as the Guest of Honour. Wreaths were laid by Helen McEntee TD, Minister of State for European Affairs, Gerry O’Connor, Cathaoirleach of Meath County Council, H.E. Phillipe Roland, the Belgian Ambassador, and Colonel Max Walker, representing the British Ambassador, H.E. Robin Barnett at the memorial to Francis Ledwidge, made of  Iper stone which is an exact replica of the one that stands on the spot in Belgium where he died. 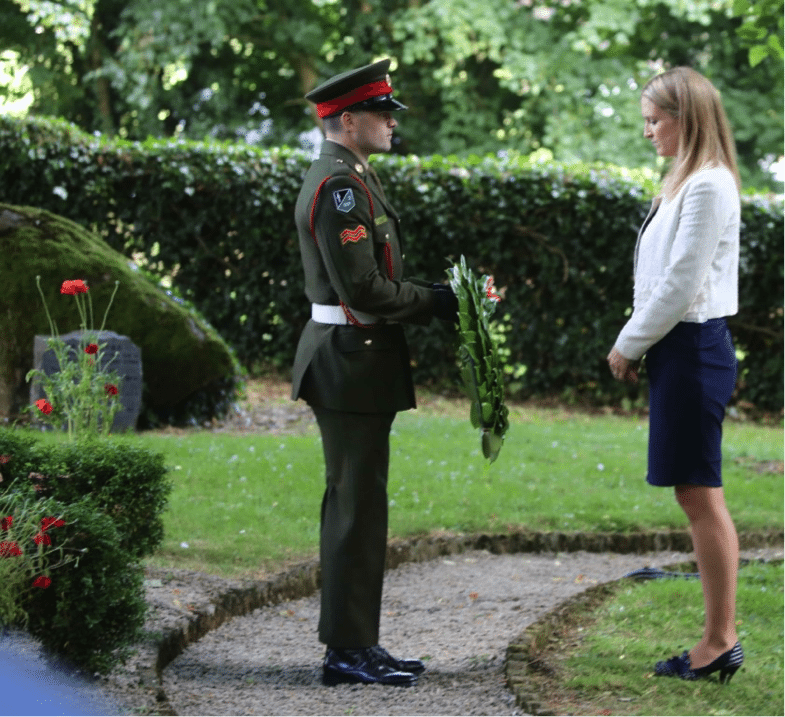 The Minister for European Affairs Helen McEntee TD described Francis Ledwidge as a “poet, a patriot and, first and foremost, a proud Meath man”. Reading from his poem A Lament for Thomas MacDonagh, she recalled how Ledwidge, a British soldier and Irish patriot, had been deeply conflicted by the Easter Rising. She spoke of how the memories of the Irish men who served with the British Army during the First World War were, until recently, “whispered – hidden and ignored”, but the decade of centenaries had provided a “new momentum and interest on remembering those who fought and died and on reflecting upon the complex narratives surrounding Ireland’s participation in that war”.

A Celebratory Concert titled “Ledwidge; Soldier, Poet” reflecting Francis Ledwidge’s life and death as a soldier, through readings of his poetry and recitals of music inspired by his words, will take place on 20 July 2017. 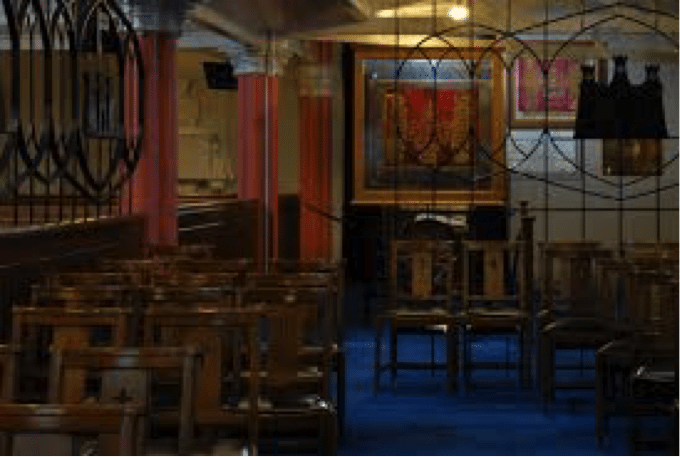 Commencing at 1930hrs, the location of the concert is St Macartin’s Cathedral, Enniskillen, the home of the Inniskillings Regimental Chapel, and will conclude across the street in St Michael’s Church. Where possible, the performers will be Inniskillings, their descendants or young people from the local area.

The concert will be in two parts; the first will review Ledwidge’s career as a soldier and the second will consider how his military service influenced his poetry. The narrator will introduce readings of Ledwidge’s poetry, recitals of musical settings of his work by Head and Gurney, musical settings of poetry which influenced him such as WB Yeats and Thomas Moore, and short talks about his military career.

The renowned actor and director Adrian Dunbar will draw the evening to a close by reading Seamus Heaney’s emotive poem ‘In Memoriam – Francis Ledwidge’.

Brigadier John Graham (Retd), Inniskillings Museum Trustee and event co-ordinator commented “Ledwidge’s story and poetry is as inspiring today as it was 100 years ago when he was killed in Flanders, and it is an honour to bring this special celebration to Enniskillen.” John concluded “This is the Inniskillings Museum’s major community engagement event for 2017 and is generously supported by the Irish Government’s Department of Foreign Affairs and Trade, the Department for Communities in Northern Ireland and Fermanagh and Omagh District Council.”