A name like Sadleir Ridings is not easy to locate on the internet with Sadleir picked up as saddler and every riding establishment in the country flogging lessons or riding rugs called Sweet Itch, Therapy and Buzz Off – even a Buzz Off rug in a Zebra print fabric if one’s horse had an identity crisis. But enough about horses.

A bookseller from Cork called George Ridings, married a lady with the unfortunate name of Mary Sewage Robinson in 1828 and had a son by her. They named the child George Lane and then poor Mary died. The baby was only a year old when George found himself another wife – Sarah Forster Sadleir, daughter of a one-time Sheriff of Cork. Sarah gave him three sons and a daughter, as well as her name.

James Sadleir was their second son, born in Cork in 1835. I am assuming that he studied medicine in Queen’s College, Cork, because his brother studied engineering there. He was awarded membership of the Royal College of Surgeons in 1855 and appears as Assistant Surgeon the following year. Three years later, he acquired a Doctorate in Medicine.
Sometime after that, he packed his scalpel for India and joined the Madras Native Infantry. In 1868 he was promoted to Surgeon and attached to the 12th MNI. From then on Ridings tended the sick and wounded of several regiments of foot within the Madras Presidency.

Later, in a report on medical and sanitary conditions of the Madras NI, Ridings lamented the unsuitability of the uniform – the forage cap afforded no protection from the sun; the red tunic was too heavy; the ‘trowsers’ dragged round the feet in wet weather; and the wretched boots forced soldiers to remove them and march bare-footed. 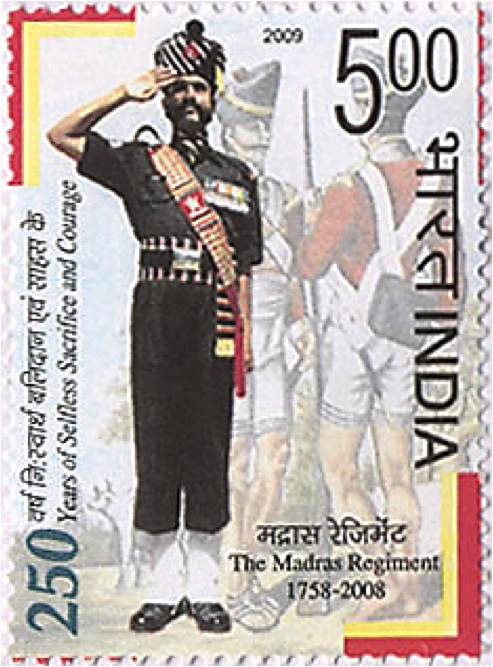 He made some valuable suggestions – loose and collarless jackets; ‘smart-looking, short [trousers] drawn in below the knee and supplemented with gaiters’; and water-proof cloak or cape (as seen in the background of the Indian postage stamp).

In January 1869 Ridings was in medical charge of 41st NI in Cuttack in the east of the country, that had been occupied by the British since 1803. Its name grew from the word ‘Katak’, meaning fort, and it’s quite possible that troops of the MNI were housed in the Barabati Fort. From Cuttack, Ridings reported that the early months of the year were pleasant, the summer months tolerable but the monsoon that year was 92” of rainfall as opposed to the annual average of 63”.
As Officiating Medical in Charge of the 12th Native Infantry in 1870, Ridings could have been stationed in the headquarters at Vizianagaram. He remained with the 12th for the next three years before transferring to 14th Native Infantry with headquarters at Mangalore. Here, he served with Surgeon Major John George Collis, of whom I have written in an earlier biography.

Vizanagaram, in Andhra Pradesh was part of French India until the 1756 Anglo-French war lost it to Britain. Its Maharaja paid for an elaborate gothic fountain close to Marble Arch in London which was demolished in 1964 to make way for a new road. All that remains is a plaque with the inscription ‘A fountain given by His Highness the Hon Maharajah Meerza Vijiaram Gajapati Raj Manea Sooltan Bahadoor of Vijianagram. K. C. S. I. stood on this site from 1867 until 1964.’

In the following four years, Ridings acquired a wife and children. He married Rebecca Charlotte Walker, affectionately known as Ruby, who gave him two daughters and a son.
By February 1878, Ridings was back with the 41st when it moved to Tonghoo in Lower Burma. He was there for a nearly a year before returning to India. His last posting seems to have been Jubbulpore (Jabalpur) in central India.

Ridings retired a year later and settled in 7 Belgrave Square, Monkstown, County Dublin. He died in 1891 on the 12th July – celebrated as ‘the great and glorious 12th’ in some parts of the country. I could not find when his wife died nor could I find much about his daughters. Both the girls were buried with him – Alice in 1901 and Ethel in 1921.

Their son, Cecil, was born in 1876. He was gazetted to the Royal Inniskilling Fusiliers. During WW1, he was mentioned in despatches and created a Companion of the D.S.O. for operations at the Dardanelles (Mediterranean Expeditionary Force). He also served with the Egyptian Army and was Brigade Major in Cape Town, South Africa.

Surgeon Major Ridings’ brother, Henry Sadlier, qualified as an engineer and had a spell in India as Civil Engineer, Irrigation, Public Works Department, in the Bengal Presidency. However, due to his wife’s ill health, he was forced to return to England. Later in life, he married someone else and went off to South America.