The William Eddowes in this grave was buried (if you’ll pardon the pun) under a virtual landslide of Eddowes’ – from artists to Jack the Ripper victims, many in the armed forces, many in India and many called William. To confuse matters further, there were two William Eddowes, both from Shrewsbury, both doctors and both with sons called Cyril. So it is safe to conclude that they were related. Our William was the second of John Eddowes’ and Maria Nealor’s nine children. He was born on 3rd October 1827 and, like his siblings, was christened in St Chad’s Church, Shrewsbury. His father came from a long line of booksellers.

I could not find where Eddowes studied medicine but it is possible that, like his younger brother, Ralph, he, too, attended St Pancras in London. By the age of 23, he was a Member of the Royal College of Surgeons. The same year, 1850, he added LSA (Licence of the Society of Apothecaries) to the letters after his name.

Eddowes went to Malta and then Crimea in 1854, probably with the Hospital Conveyance Corps, which was hastily cobbled together during the Crimean war. Out of this grew the Medical Staff Corps with headquarters in Chatham. (Some 4 decades later, it amalgamated with the Army Medical Staff to emerge as the Royal Army Medical Corps.)

After that, like all those Eddowes’ before him, he sailed for India, and joined the Medical Service of the Bengal Army in 1856. Eddowes passed the obligatory colloquial examination (or pidgin Urdu), while serving with the Erinpoorah Irregular Force. Erinpoorah (Erinpura) was in Rajpootana (present day Rajasthan) and the home station of the Jodhpur Legion and 43rd Erinpoorah Irregular Force, which comprised both cavalry and infantry units under the command of the Bengal Presidency. 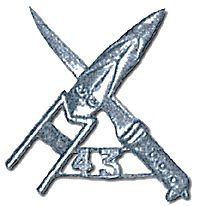 During the Indian Mutiny of 1857, Eddowes tended the wounded of the 2nd (Prince of Wales Own) Gurkha Regiment in Delhi – their defence of Hindu Rao’s house is well-documented – before returning to the EIF.

In 1859, Eddowes was posted to Allahabad, attached to the Convalescent Depot – more than likely in the majestic Allahabad Fort where my mother met her future army husband.

Back in Erinpoorah, Eddowes and the medical staff in EIF were also treating civilian cases in the villages surrounding the military base. As Assistant Surgeon, he reported in ‘The Indian Medical Gazette’ on his successful treatment of diseases such as elephantiasis and foot fungus. When the Presbyterian Church established its Rajputana Mission in 1860, Eddowes was called upon to tend the young preacher, Thomas Steele. Sadly, he was unable to save Steele’s life. Eddowes petitioned for a new hospital as daily admissions were 55 while the building could only accommodate 17. A famine had made matters worse but his appeal was ignored.

In 1868 Eddowes was promoted to Surgeon and granted sick furlough, leaving an Assistant Surgeon to tend the Empire’s soldiers. Upon his return, Eddowes wished to take charge of the E.I.F. in ‘Deolee’ (Deoli or Devli) in the Tonk district of Rajpootana, when its doctor, Surgeon Major De Fabeck, went on leave. His request was granted by the Military Secretary to the Viceroy, enjoying the delights of the cool Simla hills. It came with the added responsibility of the healthcare of Harrowtree’s Political Agency. I could not find Harrowtree anywhere (other than tree surgeons from Harrow). Perhaps it was the distortion of an Indian name.

Although Eddowes’ responsibilities weighed heavily on his epaulettes, he did manage to find the time to go shooting – be it painted partridges or photos of architectural interest. An active member of the Asiatic Society, he swapped the heat of the desert for the cool oasis of Mount Abu – the only hill station in Rajpootana – to take photos of Jain temples for the government’s archives on Indian architecture. 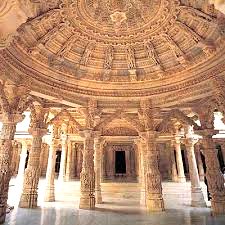 Jainism is an ancient Indian religion which began life around the same time as Buddhism – 5th Century BC – in the same place – Bihar. It aims to achieve liberation of the soul and its most fundamental principle, Ahimsa (non-violence), was adopted by Mahatma Gandhi for the freedom movement. Mount Abu is situated 185 kilometres west of the city of Udaipur. It contains the spectacular Dilwara Jain Temples – a complex of five temples, carved in white marble and situated on a hill. The intricately carved temples date back to 1031.

Surgeon Major Eddowes momentarily put down his scalpel and camera to marry Grace Agnes Annette (of whom little is known). The couple moved to Dehradun in the pleasant Doon Valley and within easy reach of the hill station of Mussoorie. Eddowes took medical charge of the regiment in 1876 before leaving for special duty to the Delhi Durbar (Imperial Assemblage) of 1877 to proclaim Queen Victoria as Empress of India.

During the second Afghan campaign of 1878-79, while Eddowes was tending the wounded of the 2nd Gurkhas, Grace was giving birth to her first child. Born in February 1878, the baby was named . . . William.

Soon after, Eddowes was granted sick furlough and retired to Ireland where the family lived in 35 Park Avenue in Sandymount, Dublin. It was here that Surgeon Major William Eddowes died in January 1880.  He was only 52 and left behind a young widow and two-year-old son.  The grieving Grace Agnes Annette’s words on her husband’s grave in Deansgrange Cemetery said it all . . . 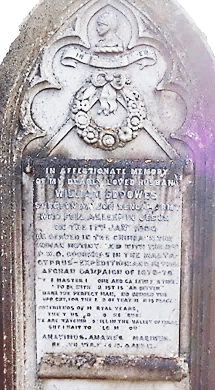 There is a bittersweet post script to Eddowes’ story – in September of 1880, Grace gave birth to their second son, Henry Cyril.
Soon after, she took the boys to England and settled in Bedford. In 1891 she applied for debtor’s discharge and appeared under Notices of Intended Dividends until 1900. She probably died after that but it is not known where she is buried.

I shall continue the Eddowes story with the sons, one of whom had a military career more remarkable than his father’s.

In the best of Indian traditions, PO Gurkhas underwent many reincarnations (although it had nothing to do with Karma). Raised in 1815 as the Sirmoor Battalion, by 1825 it was parading first as 8th (Sirmoor) Local Battalion, (‘local’ being a euphemism for ‘irregular’) and then 6th.

It saw action in the Maratha and Sikh wars. In the Indian Mutiny of 1857, it fought in Delhi alongside the 60th Rifles and Corps of Guides Infantry. The regiment’s loyalty to the British during the Mutiny won it the honour of becoming the Sirmoor Rifle Regiment and its sepoys were elevated to ‘riflemen’.

In 1861 it was re-titled 2nd Gurkha (Sirmoor Rifle) Regiment. Fifteen years later, the regiment acquired a royal connection and became 2nd (Prince of Wales Own) Gurkha Regiment, with the future King Edward VII as its Colonel-in-Chief.